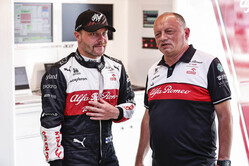 Now enjoying an Indian summer with Alfa Romeo, Valtteri Bottas has admitted that he came close to quitting F1 at the end of 2018.

Following the shock retirement of Nico Rosberg just days after winning the 2016 title, Bottas was recruited from Williams to be Lewis Hamilton's new teammate.

From the outset the Finn struggled to match the performance of the Briton, who by now had three titles under his belt.

The situation wasn't helped when team boss, Toto Wolff referred to the Finn as "a sensational wingman" for his performance during the 2018 Hungarian Grand Prix, when he spent much of the second half of the race holding off Sebastian Vettel's Ferrari in order to allow Hamilton to pull away.

His job done, the Finn was subsequently involved in a clash with Daniel Ricciardo which dropped him from second to fifth.

"It feels a bit bittersweet," admitted Wolff at race end, "I don't know why, because Valtteri would have deserved a podium because he was such a sensational wingman."

The wingman tag stuck, and while Bottas remained with the German team until the end of last year, to be replaced by George Russell, it is only now that he has admitted how he felt at the time.

"I put so much pressure on myself," he admits. "Towards the end of '18, especially when I started to have the support role, I really couldn't take it, I really struggled. It was not fun."

Asked if he meant quitting Mercedes or F1 entirely, he replies: "Yes, absolutely. I was done.

"The human mind is strange in a way," he continues, "sometimes you go into dark places and you lose the joy on things. I lost the joy of F1 and racing in F1. I was almost angry to F1.

"It's weird," he adds. "I just needed some time off. Think things in a big picture and realised it's a pretty cool sport and I still have great opportunities ahead of me."

The Finn's decision to stick with it was vindicated just months later when he won the season opener in Melbourne, venting his feelings with that infamous "to whom it may concern, f*** you" radio call.

"Now when I look back at it was a great school for me," he admits, "I learned a lot about myself, to give myself more of a leash, not to be too hard on myself. But learned so much about everything that I'm really glad it happened.

"Those kind of moments, I just want to tell people to always look at the big picture in life. If you feel a bit anxious in life, take a step back, there's always so much more to get if you don't give up."

The Finn is currently 8th in the driver standings, just 31 points adrift of his former teammate, who is 34 points down on Russell.