Porpoising down to Mercedes not rules, says Horner 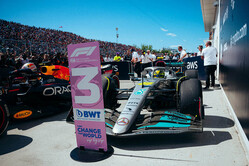 As the row over porpoising looks set to dominate the summer, Christian Horner insists that it is Mercedes car concept that is at fault and not the 2022 rules overhaul.

Though it was barely mentioned during coverage of the race, Saturday's meeting of the team bosses witnessed scenes that will go down a storm with those new 'fans' attracted by the soap opera element to Drive to Survive.

Indeed, talking of storms, several team bosses are said to have left the meeting with faces like thunder, with Toto Wolff having almost lost the plot as he shouted down Horner and Ferrari's Mattia Binotto.

While the Mercedes team was performing miracles in the garage, turning the W13 "s***box" into a potential race winner in days, and Lewis Hamilton's crippling back pain disappeared at a pace that would have impressed Lazarus, some team bosses were voicing their suspicion at the fact that the technical directive aimed at ending porpoising, and which would benefit Mercedes most, came days after - former Mercedes employee and advisor to Toto Wolff - Shaila-Ann Rao had been appointed interim secretary-general at the FIA.

Having already voiced his concern at her appointment, at Saturday's meeting Binotto was joined by several others who expressed suspicion at the timing of Rao's arrival and the issuing of the technical directive that looks to cure the W13's ills.

Horner insists that the issues compromising the W13 are not about the 2022 rules overhaul, but rather Mercedes interpretation of them, and to that extent does not see why all the teams should have to make changes just because one got it wrong - one, some are almost suggesting - that now appears to have a powerful voice within the FIA.

"The issue with Mercedes is more severe, or certainly has been prior to (Canada) than any other car," said the Red Bull boss. "That surely is down to the team. That's within their control to deal with that, if it's not affecting others.

"I know it was said other drivers have been complaining," he admitted. "Our drivers have never complained ever about porpoising. They've said certain circuits could do with tidying up, perhaps resurfacing in places. But we haven't had an issue with bouncing.

"The problem is they're running their car so stiff. I think their concept is the issue rather than the regulation."

Horner joined Otmar Szafnauer and Franz Tost in questioning the timing of the issuing of the directive, and how Mercedes was able to react so quickly to it in terms of a second stay to stiffen the floor that was subsequently removed upon fears of it being protested.

"There is a process of these things to be introduced," said Horner. "I think what was particularly disappointing was the second stay. It has to be discussed in a technical forum, and that is overtly bias to sorting one team's problems out, which were the only team that turned up here with it, even in advance of the TD. So work that one out."

Ahead of the Silverstone race, the FIA will meet with technical directors to discuss the issue, as Horner insists that there is no need for drastic measures.

"You've got some of the brightest engineering talent in the world, and things will converge," he said. "I doubt we'll be sitting here next year talking about the bouncing, even if the regulations are left alone.

"These cars are still relatively new," he added, "I think as teams add developments to their cars, you'll probably start to see them start to address some of these issues. And you can't just suddenly change technical regulations halfway through a season.