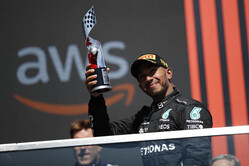 Days after it looked as though he might not even be able to compete, Lewis Hamilton joined Max Verstappen and Carlos Sainz on the podium for the Canadian Grand Prix.

While the porpoising row rumbles on, the W13's bouncing appeared to be kept to a minimum as the seven-time world champion claimed his second podium finish of the season.

Improvements to the car, coupled with an early stop under the VSC, thereby switching from mediums to hards, allowed him to give one of his strongest performances of the season.

The "disaster" that was Friday, when Hamilton declared his "s***box" W13 "undriveable", seemed a lifetime away as the Briton grinned from ear-to-ear.

"It's quite overwhelming, honestly, to get this third place," he subsequently told the media. "It's been such a battle this year with the car and as a team. But we continue to stay vigilant and focused, never giving up.

"That's something I'm so proud of," he added, "I'm inspired by my crew... so thank you to everyone that's here and back at the factory.

"They're a little bit too quick for us at the moment," he replied when asked about the pace of the Red Bull and Ferrari. "I was giving it everything but we're getting closer. So we've just got to keep pushing. Hopefully we will be in a fight with these guys.

"Honestly, our pace was quite good," he added, "particularly in the second phase of the stint.

"We did a lot of work back in the simulator but also here to get the setup right. So honestly, I'm ecstatic. I didn't expect this coming into the weekend. It's my second podium of the year. So this feels really special, especially where I got my first Grand Prix win."