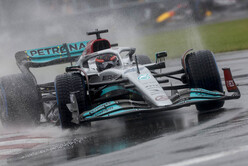 George Russell insists he has no regrets over his decision to switch to slicks in the closing stages of Q3, a move that was to prove costly.

Though a clear dry line had appeared, especially on the long run from the hairpin to the final corner, at other parts of the circuit there remained damp patches and puddles.

A number of drivers had been asked about the crossover between the inters and slicks, Max Verstappen even calling on his team to have a set (of slicks) on standby, but in the end only Russell made the call.

Sadly it ended in tears, the Briton losing the rear of his Mercedes in Turn 2 on his flying lap, spinning and clouting the barrier.

Doomed to start the race from eighth, the cameras cut to the Mercedes garage where Toto Wolff looked suitably unimpressed.

Nonetheless, the youngster stands by the decision to make the switch, taking full responsibility for the call.

"I think half the track was totally dry," he continued, "another quarter of the track there was a small dry line and then the last quarter which was Turn 1 and 2, it was on its way.

"It just takes one corner," he admitted, "but at the end of the day, we're here to fight for more."

"I realised it was going to be very tricky," he sighed, "but I thought with a warm-up lap, that last lap may have been the one.

I'm glad I went for it," he insisted, "because it could have paid off. I want to fight for pole position, I'm not here to settle for P3 or P4.

"I think we had a good car today. I saw the dry line appearing and it only takes one corner to let you down and for me that was Turn 1 and 2. It happened last year in Sochi when I was one of three drivers to go from inters to slicks and I qualified P3 with a Williams. It's high risk, high reward. It didn't pay off today but the race is tomorrow."