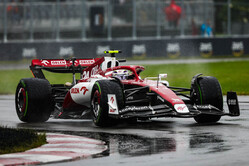 Alfa Romeo F1 Team ORLEN set itself up for a battling Sunday with a solid performance in qualifying for the Canadian Grand Prix. In treacherous conditions, with a full-wet track in Q1 giving way to intermediate conditions in Q2 and Q3, Zhou Guanyu claimed his first top-ten qualifying shootout appearance in his career, setting the tenth fastest time. Valtteri Bottas was 11th, completing the day for the team and making sure both cars will be in a position to fight for the points in tomorrow's race.

Frederic Vasseur, Team Principal: "Today we delivered a good team performance in tricky conditions, and we have placed ourselves in a good position to score points with both cars, which is our objective every weekend. Zhou claimed his first Q3 with some really good driving, even more impressive given the track conditions. His was a display of maturity, proof of his continuous progression, and he can hopefully go on to have a good race tomorrow. Valtteri was unlucky with the timing in Q2: he was the first driver to start the final attempt and, with the track improving very quickly, the cars coming after him had a clear advantage. Still, we are starting with both drivers straddling the top ten: we are expecting drastically different conditions tomorrow, but our race pace in the dry is traditionally strong so we are confident we can fight for points with both cars."

Valtteri Bottas: "I felt we could have been even higher than P11, but I got unlucky with the timing: I was among the first to cross the line at a time when the track was improving almost one second a lap. Everyone behind me had a big advantage so I wasn't lucky with that, and I had a small lock-up at turn one that cost me a bit of time: it's a pity as the car felt good in mixed conditions. The track was quite tricky, especially in Q1 when visibility was close to zero; in Q2, the surface improved quickly and it felt like a big improvement. Conditions tomorrow will be completely different, it's something we kept in mind with our setup, and I expect us to be competitive: we can fight with both cars for some good points. It's good to have both Zhou and me up there, he did a good job today to get in Q3 for the first time."

Zhou Guanyu: "I'm extremely happy to get into Q3, especially as it was my first time having a fully wet qualifying session on only my third rainy session overall, after Imola and FP3 today. From the moment I woke up this morning and saw the conditions, I knew that anything could happen. We've been often close to Q3 in the past, but I was not expecting to reach it here in Montreal, which is a completely new track for me. Nevertheless, we've showed good pace and good progress during the season so far and this is the result. I enjoyed driving in these conditions, and with the added pressure for us drivers, because every little mistake could affect your performance. It was really tough out there today, the track was slippery and it was almost impossible to see the other drivers in front. I'm happy to have been able to give everything I got, my laps in Q3 have been a bit messy but I am glad to have extracted the full potential from the car. In terms of race pace, we have always been quite strong in the past in dry conditions, so we will try to give our best tomorrow and fight for a top ten finish."