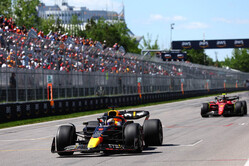 Over the years the Circuit Gilles-Villeneuve has provided us with some genuine thrillers - which is only right when you consider the legendary driver it is named after - and today's race could be up there with the best of them.

Whether we will be able to use adjectives such a thrilling and exciting remain to be seen, but it definitely has the potential.

With the Weather Gods having done their work yesterday, we have the sort of grid Ross Brawn had in mind when pushing for reverse grids - by the way, whatever happened to dear old Ross, we haven't heard from him lately.

OK, we have a usual suspect on pole, but in terms of that Q3 lap deservedly so, however, look where Charles Leclerc is starting.

Though Carlos Sainz starts from third, like his teammate there are reliability concerns, while Sergio Perez is down in thirteenth after hitting the barriers in Q2 and consequently pretty much out of the equation, certainly in the early stages..

Saturday's conditions meant the porpoising that has plagued Mercedes all year wasn't quite as evident, but in today's sunshine we can expect to see Lewis and George bouncing away as usual.

While this will hamper them in pursuit of the leaders it will also leave them open to attack from those behind.

And look who we have behind... Magnussen, Schumacher, Ocon, Ricciardo, Zhou, Bottas and Albon. Honestly, you couldn't make this stuff up.

Surely nobody would begrudge the Haas pair a decent points haul, especially young Mick, while Zhou is clearly gaining confidence having out-paced his teammate for the second time this year.

God alone knows how it will look once given the Drive to Survive treatment, but that moment in the dying seconds of Q3 when the Spaniard's Alpine emerged from the spray to claim third was iconic, and in all honesty we were cheering with the rest of them.

Over the years - so many years - Fernando has shown himself to be a wily old fox, indeed a fox with the soul of a Samurai, and the fact is that you write him off at your peril.

In Monaco and Baku he frustrated Hamilton and the McLaren pair, making his car as wide as legally possible, and digging deep into his sizeable bag of tricks to thwart their every move.

Today, other than seeking to hold off countryman Carlos Sainz, Alonso will be keen - an understatement surely - to similarly thwart the ambitions of Max Verstappen.

The two-time world champion admits he hasn't a hope in hell of winning the race, but to lead the field out of Turn 2 would give him great pleasure, and when the Spaniard warns of "maximum attack" you can be sure he means it and were we alone in smiling when the Samurai insisted he would not try a Kamikaze move on the run to Turn 1?

For his part, Verstappen would be best served allowing the Alpine driver his moment in the spotlight and instead concentrate on the threat from Sainz, but as we all know the Dutchman can never walk away from a scrap.

Over the years we've seen numerous first lap incidents here, let's hope that today we can get through those first few corners cleanly, for this lottery-style grid has the potential to provide some great entertainment and it would be a great pity to compromise it with some needless red-mist silliness before the race is barely underway.

Along with porpoising, another issue worrying drivers this afternoon will be reliability, and with that in mind Ferrari and Red Bull will be hoping they have got on top of the various problems that have plagued them this year.

A one-stopper is expected to be fastest today, with best way being to start on the medium and then move onto the hard. There's broadly comparable degradation between the soft and the medium, but the medium offers a wider pit stop window and more driveability than the soft, so starting on it gives drivers more options.

Soft to hard is also a viable one-stop strategy, but it commits the drivers to stopping slightly earlier than they would on the mediums. The big unknown is safety cars, but there is no way to prepare for those other than to consider as many options as possible.

A two-stopper is slightly slower, but under the right circumstances it could work: especially as you lose less time in a pit stop here than on any other circuit on the calendar, also because the drivers effectively cut out the first and last corners by using the pit lane.

For those starting further down the grid, there might be an argument for starting on the hard tyre and going long: hoping to make the most of a safety car, for example, by avoiding a pit stop and then switching to a faster tyre at the end. This is a circuit where you can overtake, so track position isn't quite as paramount as other places.

Ahead of the formation lap, Perez is told: "Patience, it's going to be a long race, it will come to us. Save the tyres, save the brakes for when we need them, build up the margin and then make it count when we do."

All are starting on the mediums bar Bottas, Perez, Norris, Stroll and Leclerc who have gone for hards.

They heads off on the formation lap, all getting away cleanly. However, the field is quite spread out with Verstappen setting an unusually keen pace.

They're away! Verstappen makes a great start, Alonso not so. Heading into Turn 1, Hamilton and Sainz are side by side. The Spaniard, with the inside line, gets ahead and is level with Alonso, but now the Alpine driver has the advantage in Turn 2.

Behind, Hamilton and Magnussen are side by side, as are Ocon and Schumacher, while further back Bottas runs wide.

Hamilton continues to battle Magnussen and in Turn 3 they touch.

At the end of lap 1, it's: Verstappen, Alonso, Sainz, Hamilton, Magnussen, Ocon, Russell, Schumacher, Ricciardo and Zhou. Bottas misses the final chicane and to make matters worse, doesn't follow the race director's instructions in terms of rejoining the track. At the back, Leclerc is up to 17th and Gasly 18th.

At the end of lap 3, Sainz passes Alonso on the pit straight, as Magnussen is warned he has "small front wing damage".

Alonso is now under attack from Hamilton who is 2.3s clear of Magnussen. Having been thwarted by the Spaniard in Monaco, Hamilton will be keen for payback.

Perez is eleventh, while Leclerc is up to 16th.

Russell passes Magnussen for 5th, the Briton 3.6s down on his Mercedes teammate.

Vettel and Gasly both pit at the end of lap 5, as Magnussen is shown the black and orange flag.

Vettel and Gasly have both switched to hard suggesting their mediums were graining.

As Sainz posts a new fastest lap (17.963), Magnussen pits for a new front wing, much to the Dane's frustration. He rejoins in 20th position.