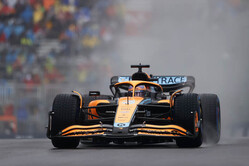 Ahead of today's sole practice session, the air temperature is 11.5 degrees C, while the track temperature is 16.6 degrees. As predicted, and in sharp contrast to yesterday, it is cold, wet and lightning lights up the clouds, which means w whole load of problems for those already struggling.

Max Verstappen set the pace in both of yesterday's sessions, the world champion having a trouble-free day. On the other side of the garage however, teammate Sergio Perez struggled with balance, the Mexican unable to find the right set-up for his car.

While Ferrari were on the pace, Charles Leclerc has already incurred a 10-place grid penalty after taking on a new set of control electronics, thereby exceeding his allowance, and with talk of Ferrari seeking to put another engine into his pool it is entirely possible the youngster faces another penalty.

That means Carlos Sainz stepping up to the plate, though the Spaniard isn't having the best of times, what with his hydraulics issue in Baku and the incidents in Melbourne and Imola.

At Mercedes, Lewis Hamilton described the opening day as a "disaster", the Briton not just writing-off this weekend but pretty much the rest of 2022 and even 2023. Technical boss, James Allison is on hand but even he is unlikely to be able to perform the miracle that the German team needs.

In a further blow, the world champion were forced to remove a second stay they had trialled on George Russell's car on Friday in a bid to stiffen the floor. Amidst claims that the additional stay did not meet the regulations and could be protested if used in qualifying, the German team opted to remove it.

Best of the rest were veterans Fernando Alonso and Sebastian Vettel, with Pierre Gasly keeping them company, while McLaren was there or thereabouts.

Ahead of the green light, while the rain has now stopped, it is damp and the dark clouds overhead suggests the threat of further downpours, not only over the next hour but also for qualifying.

Magnussen is first out, followed by Bottas, Zhou and Schumacher.

As Magnussen tentatively feels his way around the circuit, Leclerc heads out.

"The conditions are quite **** out here to be honest," reports Schumacher.

As more drivers head out, there are wobbles for both the Ferraris.

Most drivers head back to the pits following a nervous exploratory lap, while both drivers enjoy minor excursions.

At which point Ferrari reveals that Leclerc will take on a new ICE, turbocharge, MGU-H and MGU-K, and will therefore start from the back of the grid. Teammate Sainz takes on a new ICE without penalty.

Vettel goes quickest with a 39.041, as Ricciardo has a major wobble in Turn 2. The Australian is one of several drivers who have been off a Turn 10 also.

Seventeen minutes in Perez heads out, while teammate Verstappen watches from the garage showing no sign of heading out anytime soon.

Hamilton has been out for an exploratory lap.

The Ferrari pair head out again, indeed they have the track to themselves.

Sainz posts a 36.831, while Leclerc pits without posting a time.

Next time around Sainz improves to 35.858, over 2s up on Bottas' previous best.

Alonso goes sixth with a 38.338 and teammate Ocon eleventh (40.294), as Verstappen looks set to head out, leaving Russell as the only no-show.

"It's amazing how the Ferraris turn on their tyres on an out lap," admits Albon.

In fact, Russell heads out before Verstappen.

As the Briton posts a 39.796 to go twelfth, and Gasly improves to third, Verstappen finally heads out.

Thus far, with 24 minutes remaining, the Dutchman, Perez, Hamilton and Leclerc have yet to post a time.

While Verstappen pits without posting a time, Hamilton goes 13th with a 39.704, as teammate Russell improves to ninth (38.419).

Both Mercedes drivers improve, Hamilton to tenth and Russell to third (36.388).

With 18 minutes remaining, Alonso heads out on inters, the first to do so.

As Sainz becomes the second driver to try the green-banded rubber, Alonso fails to improve on his previous (wet) best.

Vettel also makes the switch to inters as Alonso posts a PB in S1 and goes quickest in S2. At the line the Spaniard posts a 34.836 to go top.

Magnussen goes quickest in S1 on full wets, the Dane going second overall with a 35.643.

As Alonso ups the ante with a 34.229, Verstappen heads out again, still on wets.

As Verstappen pit, like his teammate and Leclerc, still to post a time, Bottas and Ricciardo head out on inters.

Vettel goes top with a 33.891 as Perez heads out on the green-banded rubber.

Verstappen heads out again, now sporting the inters, as Alonso posts a 33.836.

The only drivers still to run the inters are the Mercedes pair, Schumacher and Leclerc.

Magnussen is off at Turn 2 having totally missed the first complex. "Oh, what happened there?" he asked after appearing to run out of road.

Verstappen is off at Turn 2, after spinning when he hit a puddle.

In fact the sudden spate of incidents is down to the fact that it is raining again.

A late improvement sees Ricciardo go third with a 34.110.