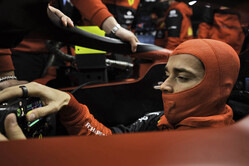 New set of control electronics means that Charles Leclerc is handed a 10-place grid penalty as Ferrari ponders opportunity of adding another engine to Monegasque's pool.

Although the new ICE (internal combustion engine), MGU-H, MGU-K and Control Electronics announced earlier did not exceed Charles Leclerc's allowance, Ferrari's subsequent decision to take on another set of Control Electronics did, earning the youngster a 10-place grid penalty for Sunday's race.

With an eye on the engine issues the youngster encountered is Spain and again Azerbaijan, it is now thought that Ferrari might bite the bullet and take on another power unit tomorrow to add to his pool.

Though this would mean further penalties, possibly even demotion to the back of the grid, alongside Yuki Tsunoda, the Montreal circuit does at least allow for overtaking.

With this in mind, Leclerc was seen following a number of drivers very closely over the course of today's second session, most noticeably Daniel Ricciardo, suggesting that he was acquiring data for Sunday.

Another clue to the team's strategy might be that the Monegasque ran the entire session on softs.

Though it was inevitable since Spain that Leclerc would eventually face a penalty, the reality comes as a bitter blow especially in the wake of last week's race in Baku, where his retirement allowed Max Verstappen the opportunity to build a 34 point comfort cushion.