Verstappen sets the pace in opening session in Canada 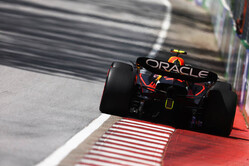 Ahead of today's opening session the air temperature is 25.2 degrees C, while the track temperature is 44.7 degrees C. Contrary to what was forecast it is bright and sunny. However, race control insists that there is a 20% chance of rain.

However, all eyes are on porpoising at the moments and the FIA's move to reduce, even end, the phenomenon.

Quite apart from the FIA's issues, which are basically about ride height, Mercedes is trying something with its floor, something involving a large cut-out at the edge.

For this session both the Mercedes are fitted with different floors , Hamilton running with the cut-out and Russell without for the purpose (sorry) of comparison.

The lights go green and Tsunoda leads the way, followed by Bottas, Ricciardo, Sainz and Magnussen.

Indeed, as a large black cloud suddenly appears overhead there is a mad rush to action.

Most are on mediums though Tsunoda and Leclerc are on softs.

Soon there are 17 drivers on track, the Williams pair and Alonso staying put in their garages.

Of the first wave, Verstappen goes quickest with a 17.991, ahead of Hamilton, Sainz, Ricciardo and Bottas.

On his first flying lap Russell goes sixth (19.712), ahead of Perez, Vettel, Norris and Zhou.

Sainz improves to 18.037 but his car is visibly bouncing.

A 17.902 sees Bottas go top, as onboard shows Sainz' head bouncing up and down.

"Wind is very gusty," reports Russell as Verstappen retakes the top spot with a 16.507.

Even Alonso's Alpine is bouncing, however this is probably more about the track as the Alpine hasn't been particularly affected by porpoising this season.

"My seat's very hot on the left side," reports Albon.

Perez goes top with a 15.660 as Ocon reports his front-right brake is smoking. "Failure, failure, failure, he subsequently adds though he manages to get back to his garage.

Brakes are put to the test here and the worrying thing is that the Alpine driver has only completed 3 laps.

Meanwhile, teammate Alonso has gone fifth with a 16.623. The Spaniard subsequently improves to third (16.312) while countryman Sainz goes fourth (16.400).

Interesting to see that James Allison is here.

A 16.203 sees Vettel improve to third as more drivers now switch to the softs.

Alonso is the first driver to get up close and personal with the Wall of Champions. Meanwhile, following his previous brake scare, Ocon is back on track.

The Frenchman is told that the team has lost the sensor on the corner of the car where he suffered his earlier failure. "So if anything doesn't feel right..." he is told.

Reporting that his inside front wheel is in the air, Verstappen is told to pit.

Leclerc goes second with a 15.666, ahead of Verstappen, Stroll, Vettel, Ricciardo and Albon.

Sainz improves to 15.404 but remains second.

"Interestingly, a bit like Baku, this is another weekend where FP1 and FP3 are more representative than the race than FP2," says Pirelli, "which is the least relevant practice session of them all. However, while FP1 starts at the same time as the race, the amount of track evolution at the moment can make it hard to draw any consistent conclusions."

With 18 minutes remaining, Ocon is the only driver yet to try the softs.

Russell is told that he's losing out under braking for Turn 10. "Yeh, that last lap was rubbish," he admits.

"Got blocked," says Bottas as he encounters a slow Gasly in the opening complex.

Bad groundhog! A groundhog runs across the track and is lucky not to be taken out by Gasly, Ricciardo or Hamilton. If that was a cat it would be down to 8 lives.

As the clock ticks down, all bar Norris are on track. The Briton's McLaren is up on its stand.

"The rears are destroyed," warns Leclerc after 13 laps on his mediums.

"Front brakes are a little bit warm," Perez is told.