Leclerc to start from back of Montreal grid 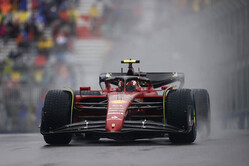 As expected, Ferrari has opted to give Charles Leclerc extra engine elements meaning that the Monegasque will start Sunday's Canadian Grand Prix from the back of the grid.

From the moment the youngster retired from the Spanish Grand Prix it was inevitable that a new engine was inevitable, and therefore the penalty that went with it, the only question being when Ferrari would opt to take the hit.

Though he was able to take on a new ICE (internal combustion engine), MGU-H, Turbocharger, MGU-K and Control Electronics - to replace the engine lost in Baku - without penalty, the subsequent decision to take another set of Control Electronics meant a 10-place grid penalty.

With Montreal being a circuit where overtaking is possible, and the youngster already having a grid drop, Ferrari made the decision to add another ICE, MGU-H, MGU-K and Turbocharger to his pool thereby dropping him to the back of the grid, where he will join Yuki Tsunoda.

Teammate Carlos Sainz has also taken on a new ICE, but as this is within the mandated allowance, it is without penalty.