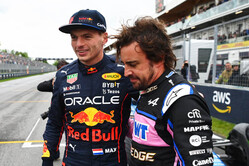 The conditions witnessed during FP3 have continued, indeed worsened, and as a result we have a wet qualifying session.

As if things weren't up in the air as it stood, those pesky Weather Gods have now decided to get involved.

And what a tantalising session they gave us, with Fernando Alonso edging out Pierre Gasly, Sebastian Vettel, Esteban Ocon and the McLarens, with the Red Bulls 8th and 9th and the Mercedes pair 7th and 15th.

And as if this wasn't enough, having taken on another engine, Charles Leclerc will join Yuki Tsunoda at the back of the grid.

These are the sort of conditions that produce heroes... but also zeroes, and with tomorrow's race expected to take place in the sort of warm and sunny conditions experienced yesterday that throws another spanner in the works... or Spaniard in Nando's case.

Hero or Zero it simply isn't worth taking any unnecessary risks especially on a track that allows overtaking.

Interesting however, that veterans Alonso and Vettel prove that there is life in those old dogs yet, something that the likes of Bottas and even Hamilton might well pay heed to as the pair continue to experience various issues with their cars.

With the session declared wet at the outset it will be the blue-banded tyres all round.

Bottas is first out followed by his teammate Zhou, then Hamilton, Russell, Verstappen, Ocon and Vettel.

It has now stopped raining, but it remains very wet.

Soon all 20 drivers are on track... each keen to get that all-important banker lap in the bag.

However, Bottas has his time deleted for exceeding the track limits at Turn 3, as does Hamilton.

With so many drivers on track, and it being a short lap, the order is forever changing.

Perez and Magnussen have their times deleted.

Other than having times deleted, drivers are also missing apexes, running wide and experiencing all manner of problems.

Perez improves to ninth with a 36.741, as Hamilton has his time deleted yet again.

Magnussen goes quickest with a 34.893, ahead of Russell, Ricciardo, Ocon and Sainz.

"What's the main limitation," Verstappen is asked. "A free track," he replies.

Magnussen, Alonso and Leclerc all have times deleted as Ocon goes second with a 33.012.

Stroll can only improve to 17th as both Canadian look likely to fall at the first hurdle.

Out come the yellows when Sainz goes off at Turn 4, however he is able to continue.

After his performance earlier it's a shock to see Vettel out so early, likewise Gasly as both Aston Martin and AlphaTauri fail to get their cars into Q2.

The stewards will be kept busy, with a number of incidents under investigation.

As Q2 gets underway, Zhou leads the way, followed by Albon, Hamilton, Russell and Magnussen.

The Dane, Schumacher, Alonso and Albon are sporting inters.

On wets, Hamilton feels it is time for the switch to inters.

Out come the yellows when Albon goes off and into the barrier at Turn 6. He is able to continue however.

Unlike Perez who is off at Turn 3.

He is given instruction on how to continue but the car will not respond. Indeed, replay shows the car was being obstinate as he entered the corner, simply refusing to turn.

Perez has a long walk back to the pits, the Mexican being led through the undergrowth the lines the track as opposed to being picked up by a recovery vehicle.

With Leclerc not looking likely to go out, Perez is likely to qualify 14th.

As the session resumes, Bottas leads the queue at the end of the pitlane.

Most drivers appear to be on inters. Indeed, all are on the green-banded rubber.

Hamilton is told that he should get five timed laps.

The times are tumbling again, as Hamilton goes quickest, then Russell, then Sainz then Verstappen (27.764).

A 28.953 sees Alonso go second as Schumacher goes sixth, ahead of Ocon, Bottas and Hamilton.

Magnussen goes fourth as the timing screen continues to light up in green and purple.

Schumacher goes third, as Norris pits having failed to post a time.

Teammate Ricciardo however, goes fourth only to be demoted when Alonso bangs in a 24.848.

Russell goes second and Hamilton fourth, both demoted when Verstappen crosses the line at 23.746.