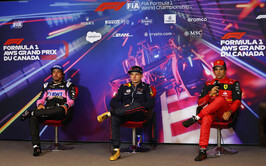 Well, Max, amazing. World Champion leading the championship, always fighting at the front and you're on pole again under very difficult conditions. Your next two rivals in the championship are at the back, your cars quick on the straight. Is it a dream for tomorrow or a tough race?
Max Verstappen: I mean, of course, I still expect it not to be a straightforward race but I think today with the tricky conditions we stayed calm, we didn't make mistakes and we had the right calls in Q3, so of course super happy with that, to get pole position here and also, you know, to be back here in Montreal. It's been a while and it's great to see all the fans.

A good race tomorrow, does it mean a good time in Montreal? Because we know that teams and drivers always love coming here. The track is fun but also the town.
MV: Yeah, you know, you really get that kind of go-karting sensation, back with like real proper kerbs around here. So we always enjoy driving here and I'm looking forward to tomorrow.

Have fun tomorrow. Wow, young man, so you left F1, you came back, it's been a bit tough. This year, super competitive but the results didn't come. This year, here in Montreal, on the front row. You almost had it. How does that feel?
Fernando Alonso: Yeah, it feels great. I mean, it was an unbelievable weekend so far for us. We've been competitive in free practice, which normally we are on Friday, but then on Saturday, we seem to lose a little bit of pace. But yeah, thanks to the wet conditions today, the car was mega. You know, I was so comfortable with driving this car and yeah, I think the fans also pushed me to make an extra push.

Carlos, it looks like you could fight for pole until the last chicane. You've been competitive all year in the dry, you're competitive in the wet today. It's been a few tough races. You don't have the points you should have in the championship. Tomorrow can you get back in the fight with Charles and Perez behind?
Carlos Sainz: Yeah that's the target. I mean today I was feeling quite OK with the car, especially in the full wet. As the track was drying I felt like the others did a bit of a step and maybe I was lacking a couple of tenths. In that lap I was coming, I think, purple one and then Sector Two I knew I had lost a bit to Max and in the last corner I just tried to do a very quick last corner but it didn't pay out and it cost me half a second. Yeah, just trying to go for it, you know, for the pole and in the end I ended up P3 for that mistake. But for the rest, I think we're in a good position for tomorrow. I think it's going to be a good fight with Max up front. Let's see what we can do with Fernando, because he's been very quick all weekend so yeah, let's see how it goes.

You know, there are a lot of Ferrari fans here, so pressure tomorrow?
CS: Everywhere we go, we have an incredible amount of tifosi. But here in Canada for some reason there's an extra number of tifosi that come to see us. Yeah, I will try to put on a good race tomorrow and see if we can fight for that win.

Many congratulations to the top three qualifiers for the 2022 FIA Formula 1 Canadian Grand Prix. In third place, Carlos Sainz. In second place, Fernando Alonso. And taking the 15th pole position of his career and his second of the 2022 campaign, our polesitter, Max Verstappen. Max, that was a hugely impressive performance by you. First of all, how much did you enjoy it out there?
MV: Well, it was just very tricky out there. You know, just especially in Q1, like visibility, and of course, people trying to find a bit of a gap, you have to slow down, your tyres cool down and you are really on the edge with the grip. So for me, Q1 was not the easiest out there. But then it started to be more and more enjoyable when the track started to dry. You started to have a little bit more grip in the wet. And yeah, then in Q3, of course, it's all about trying to put a banker lap in, but also then you have to try and follow the track and be on the track at the right time. But yeah, luckily, it all worked out.

Your first time in the wet at the Circuit Gilles Villeneuve. How much were you having to get experimental with lines and finding the grip?
MV: Yeah, a bit. Yeah, the first time you always try a few different things, where you think the grip is, and especially also trying to get the tyres to work. That was the most important thing, not even the lines. But like I said, as soon as it started to dry out, then the tyres started to work finally a little bit and then it was fun to drive.

And we saw George Russell try to go for a run on slick tyres there at the end of Q3. How close were we to that crossover point?
MV: It was just too wet in some places, like Turn 1, Turn 2. I think out of 4 all the way into 5, into 6. So, for me, it was never on. Of course, it was only like two and a half seconds, but of course you cannot take that gamble in qualifying. So, for me, it was never on. But, yeah, the other places on the track it was quite dry. Also to manage your Inter over a lap was, you know, quite a handful.

Let's throw it forward to tomorrow. It's expected to be dry. How was the long-run pace yesterday?
MV: The long-run pace was alright. It was quite close I think with Ferrari. So it's going to be an interesting race tomorrow.

Thank you, Max. Fernando, welcome back. You've been strong, it was a very strong session for you. But before we talk about your lap, can you just tell us what your expectations were coming into this qualifying session?
FA: I don't really know. I mean, we were P1 in FP3 this morning. So it seemed that we were OK in wet conditions, but it was not really wet. From Q2 onwards it was nearly dry at the end. So, in a way, I was thinking 'why should it not be a little bit wetter and rain a little bit now' as maybe that was the best thing for us. But yeah, eventually at the end it was not necessary and we were also OK in the semi-dry conditions. But the car was fast yesterday, on dry, fast on the long-run pace as well, fast on wet conditions this morning and now as well. So, so far it has been a very competitive weekend.

How clean was Q3 for you? Can you visualise where you might have lost time to Max?
FA: First of all, I don't know how far apart we are. Do you know the times?

Just over half a second...
FA: That's a lot! I think they are in a different league, for sure. It was not our in our wildest dreams to be on pole position. And so we take the first row, for sure. And that's maybe better than any expectation. But let's see, I think we still missing a little bit of downforce, a little bit of total grip in the car. We've been working a lot on the tyre degradation. Also, yesterday a lot of set-up changes. So yeah, I think we are better prepared than any other race so far this year. So let's finish the job tomorrow.

Fernando, how sweet is it going to feel tomorrow lining up on the front row?
FA: It's... OK.

So, what are the goals then, going into this race? What's the car like in the dry? What was your long-run pace like?
FA: Well, the goal is to lead the race in Lap 1. So that's Turn 1, maximum attack. And then after that, they can go and they can fight - but it will be nice. Sweet to lead the race.

Carlos, coming to you now, very well done to you as well, properly in the running for pole position. First up, just sum up the session. How satisfied are you feeling right now?
CS: Pretty okay. I mean obviously I would like to be in the first row at least. But in general, I felt like... in the wet, I've been feeling quite good all weekend. Or FP3 and Q1. Then, when the track started to dry up, I felt like Max started to get a get a bit away from us. Especially there towards Q3, already in the first set he looked particularly competitive, and I knew that going into Q3, run two, I need a very, very good lap if I wanted to steal pole position from him. I think Sector 1 was quite okay, I think I did purple, but then Sector 2, I knew I didn't just find the grip that I was expecting to find. And then into the last corner I said, okay, I'm probably not in pole position already. So I'm going to try and send it. Sending it was probably not the right call and it cost me probably P2. But yeah, a couple of tenths we missed there, I think, for pole position - but overall, a decent feeling with the car.

Carlos, this race hasn't been won from outside the front row for nearly a decade. How confident are you of changing that tomorrow?
CS: I think anything can happen in Formula 1 racing. It doesn't really matter if... the positions today, it's all about the race tomorrow. I think we get a good start and we put pressure in the guys in front, then anything can happen. I think Max seemed very quick on Friday, he's been on it all weekend. We've been chasing a bit that last tenth, compared to them - but I think tomorrow, with a good start and a good strategy, we can put some pressure.