"It hurts a lot," admits Leclerc 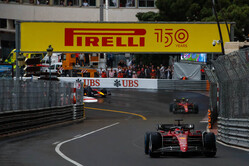 Charles Leclerc is left angry and frustrated after losing out on a 'certain win' for the second successive weekend.

Just seven days after suffering an engine issue whilst seemingly cruising on his way to victory at Barcelona, Charles Leclerc lost out once again, this time on the unforgiving streets of his home race.

Starting from pole the Monegasque led the race following the withdrawal of the safety car, making full use of the fact that he was in clear air while those behind had limited vision due to the conditions.

However, his race was turned on its head at his first pit stop on lap 18, when Sergio Perez, who had pitted two laps earlier was able to get ahead.

Worse was to follow however, when, just three laps later, he was called in for a second stop at the same time as his Ferrari teammate.

Even as the Monegasque headed into the pitlane Ferrari was aware that it had made a mistake, its calls of "box, box" suddenly turning to "stay out, stay out".

But it was too late, the Ferraris were double-stacked, as were the Red Bulls a lap later.

However, due to the error and the sheer pace of the Bulls, the overcut had worked in the Austrian team's favour, with Sergio Perez getting ahead of Carlos Sainz and Leclerc losing out to Max Verstappen, the four forming a train that was to run until the chequered flag.

"****, ****, why? Why? What are you doing?" shouted the youngster over his radio as he realised the horror of his situation.

"No words," said a clearly distraught Leclerc at race end. "I know the season is long, but we cannot do that," he added, referring to the team's tactics.

"It was a freaking disaster today," he subsequently added. "The win was clearly in our hands, we had the performance, we had everything. I just don't really understand the call that I had and I need explanations for now.

"I couldn't do much, I was called just before the last corner, so I couldn't react or ask for any information, but that was clearly the wrong choice. We need to get better."

Speaking to Sky Sports, he later said: "Sometimes mistakes can happen but there has been too many mistakes today overall.

"Obviously in those conditions, you rely a little bit on what the team can see because you don't see what the others are doing with intermediates, with dry tyres.

"I have been asked questions about whether I wanted to go from the intermediates to the slicks and I said yes but not now, it will be a bit later on in the race.

"I don't understand what made us change our mind and go on these intermediates, I got undercut and then got stuck behind Carlos.

"There has been a lot of mistakes and we can't afford to do that. It is hard, as it has been the other years here, so I am getting used to getting back home disappointed but we cannot do that, especially in the moment we are in now.

"We are extremely strong, our pace is strong, we need to take those opportunities and we cannot lose so many points like this. It is not even from first to second it is first to fourth because after the first mistake we have done another one.

"I love my team," he insisted, "and I am sure I will come back stronger but it hurts a lot.

"I think the first one was a very clear decision and a very wrong one and from that moment on the mess started. I don't know if it is panic, I obviously don't hear all the background radio that there is in the team but yeah, this is not up to me to judge.

"Obviously, the message that I had wasn't clear, the last wasn't clear because I was told to come in but then to stay out but I was already in the pit lane and that is where I basically let it all out on the radio and screamed because I knew I just couldn't do anything and I was done."

"I fully understand the disappointment for Charles," admitted team boss, Mattia Binotto, "he was first and finishing fourth means that something was wrong in the decision we made.

"So clearly we need to review it and I think we underestimated the speed of the intermediate at that stage and so we could have called a lap earlier for Charles or later on, maybe we should have left him outside on the extreme wet then going on the dry.

"These are mistakes that may happen but more importantly it is a lesson to learn to try and understand why they happened and I am sure that is a process we will do it."