FIA reveals cause of start confusion 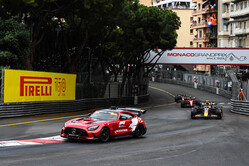 The FIA has revealed that a power outage was the reason for the confusion surrounding the start of the Monaco Grand Prix.

Just minutes before the field was due to head off on the usual formation lap, race control announced that the race start procedure had been suspended.

While rain had been forecast in the afternoon, at that particular point in time only light spots of rain were falling.

The formation lap was then rescheduled for 15:09 (local time) before a further delay to 15:16 was announced. It was also revealed that the race would get underway behind the safety car.

In a brief statement, the FIA announced: "Race control was monitoring a severe downpour rapidly approaching the circuit. As it arrived during the start procedure, the safety-car start and its associated procedures were implemented. This was done for safety reasons because there has been no wet running this weekend."

At 15:16, with the rain now increasing in intensity, the safety car led the entire field around the track for two laps before the race was red-flagged.

Almost an hour after the original designated start time the race finally got underway, behind the safety car which was withdrawn after two laps.

Other than the fact that it was barely raining when the original start was aborted, it was the sheer lack of information which frustrated the teams and fans, with no sign of the safety car being sent out on reconassance laps.

FIA officials subsequently revealed that a power outage had led to the failure of the starting system and as officials debated how to start the race, the outage had led to fears that the start system would not work and therefore, in the interests of safety, opted for rolling restarts for the remainder of the event.

Nonetheless, in the aftermath of last year's Belgian Grand Prix, many feel that lessons have not been learned, and that it was the sheer lack of information that led to the confusion and frustration of the teams, broadcasters and fans alike.

With the future of the race already in serious doubt, as F1 bosses sit down to discuss terms with the Monaco organisers, the race, when it finally got underway, proved to be the sort of mad affair only the Principality can throw up from time to time, one which had fans talking for all the right reasons.

It was at this circuit, in atrocious conditions, that Ayrton Senna first served notice and one can only imagine the legendary Brazilian's reaction to the fact that race director, Eduardo Freitas appeared to bottle it, even to the extent of a rolling restart following the Schumacher red flag period, as opposed to a full-on battle to the finish.

Is this the new, Netflix-friendly F1, where at the merest hint of rain the drivers retreat to their garages?

"We're Formula One drivers," said Lewis Hamilton of the decision to suspend the original start. "I was like, 'Let's go', when it was drizzling just a little bit."

"I remember in days gone by, we could have raced," added another wet-weather expert, Sebastian Vettel, who recalled Brazil 2012 and China 2009.

"If the conditions are OK, they should start us," said Kevin Magnussen. "Maybe give us a crash course in wet-weather driving or something. We can go and take some classes.

"We are professional drivers, and this is Formula One," he added. "It's not the World Endurance Championship."

Of course, when drivers-turned pundits are calling on race control to 'turn on DRS' and Ross Brawn and his team are continually looking for gimmicks to 'spice up' the action, one recalls Bernie Ecclestone's suggestion, in the light of Brazil 2009, that sprinklers be placed around circuits in order that the track could be soaked occasionally.

Of course, this was all before Liberty and Netflix came along and sanitised the sport, opting for family friendly entertainment as opposed to sporting spectacle.