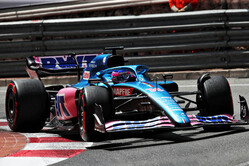 Fernando Alonso believes his "very stupid mistake" in Q3 cost him the chance of a third-row start in the Monaco Grand Prix.

While attention was focussed on the Perez/Sainz incident at Portier, not for the first time this weekend the TV director missed another important incident, namely Fernando Alonso crashing at Mirabeau.

Having gone seventh quickest on his first flyer, the Spaniard was looking set to improve on his second when he received a radio message warning him of the incident ahead.

"I made a mistake," explained the Spaniard, a two-time winner here. "The out-lap was not ideal so the brakes were cold already in Turn 1, Turn 3 and Turn 4.

"I was thinking if I should keep pushing or not because I did not feel the car was right, or the preparation right.

"And then I was looking at the steering wheel and I braked too late for Turn 5, so it was a very stupid mistake.

"It hurts a little bit," he admitted, "because I think there is more potential in the car, so it was my mistake today, I didn't complete the lap, so maybe P5 was possible, and I made that mistake. I lost concentration, so I braked too late, and locked the tyres.

"Obviously I have to apologise to the team because, apart from the positions that you could make, every mistake this year costs money for the cost cap."

Asked about his hopes fro the race, he said: "Well, it's going to rain apparently, so I think situation will change a lot so let's see.

"I think nobody knows how we will perform in the rain here or how the grip will be so a lot of question marks, and a very stressful afternoon for everybody," he predicted.

"If the rain comes it could be very chaotic, with lots of safety cars and red flags. You can be on the podium or you can finish on the first lap against the wall because you are aquaplaning in one place and that's it. I'm sure it will be great to watch on TV, but very stressful inside the car."