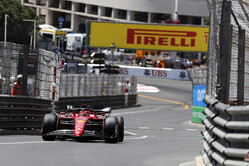 We say "all-important" because this, this is Monaco, then again, with showers and rain expected tomorrow, maybe not so.

Sergio Perez was quickest his morning, the Mexican edging out Charles Leclerc. Both Friday's sessions saw the Monegasque quickest, but Perez, Sainz and Verstappen have constantly been there or thereabouts.

Lando Norris has consistently been 'best of the rest', though this morning he was edged out by Pierre Gasly, with Kevin Magnussen, Fernando Alonso and the Mercedes pair looking good, despite a difficult start to the session for the Silver Arrows who appeared to have gone in the wrong direction, in terms of set-up, overnight.

Compared to their teammates, Esteban Ocon and Daniel Ricciardo were off the pace, the Australian really needing a good result this weekend.

As we know, Monaco can, and does, throw up surprises, and it is likely that this will be the case this afternoon.

A number of drivers are up before the stewards following this morning's session, while Aston Martin has changed the right-front section of Stroll's car following his brush with the barriers.

There is increasing talk of Monaco facing the axe, but the fact is that other than all the jewel in the crown nonsense, it remains a genuine race track that the drivers respect and love, one that demands respect and punishes the slightest mistake.

Not for nothing is it one of the three races to comprise motor sport's Triple Crown.

As we await news of those drivers up before the stewards for impeding, it is highly likely that traffic is going to be an issue, certainly in Q1, probably in Q2 and possibly even Q3.

The lights go green and Magnussen leads the way, followed by Schumacher, Albon, Norris, Bottas and Zhou. All are on softs.

Soon, all twenty drivers are on track, all sporting the red-banded tyres.

Magnussen's benchmark is an unimpressive 17.061.

A 14.295 sees Verstappen go top as Russell complains: "I've got no grip whatsoever."

Alonso goes quickest (14.148), ahead of Norris, with Ocon fifth ahead of Magnussen. It is fast and frantic.

Perez is the first to dip into the 1:13s, while Sainz matches his time (13.292) to one-thousandth of a second. In FP3 it was Leclerc and Perez who at one stage posted identical times.

Leclerc ups the ante with a 12.939 as Alonso goes fourth and Norris seventh.

Ricciardo can only improve from eleventh to ninth (14.062), as Hamilton slips to 14th.

Quickest in the first two sectors, Leclerc raises the benchmark with a 12.569.

Schumacher improves to seventh with a 13.469. while teammate Magnussen subsequently goes fifth.

Stroll goes ninth with a 13.678 and Latifi sixteenth.

Vettel improves to twelfth and Russell third, the Briton crossing the line at 12.787.

The session is red-flagged with 02:25 remaining. It is unclear why the session has stopped, until Tsunoda says: "I've hit the barriers."

He has returned to the pits so it remains unclear as to why exactly the session was stopped.

With the session resuming with 02:25 remaining, it is going to be absolutely frantic.

Ricciardo is currently in the drop zone, along with Ocon, Latifi, Tsunoda and Zhou. Norris, Vettel and Stroll are hovering.

Albon leads the way, and as more and more drivers head out, Leclerc, Sainz, Russell and the Bulls remain in their garages.

When the dust settles, Albon, Gasly, Stroll, Latifi and Zhou are out.

That red flag, which appears to have been totally unnecessary, ruined it for Gasly, in particular, who was on a hot lap at the time, as was Zhou.

Verstappen is first out for Q2, followed by Sainz, Norris, Tsunoda, Leclerc and Hamilton. While most are looking a two runs, the Alpine pair appear to be looking at one.

Norris goes fifth (12.911), ahead of Vettel, Bottas, Tsunoda and Ricciardo.

Bottas can only manage 12th, while Verstappen remains fourth.

Leclerc goes top with an 11.864 as Hamilton requests a second cool down lap.

Leclerc is called to the weighbridge but misses it and has to be pushed back by his mechanics.

Having posted a PG in S1, a mistake in S2 see Hamilton abort his lap and settle for another try.

Hamilton goes seventh and Vettel eighth, while Bottas fails to make the cut.

The top four - Leclerc, Perez, Sainz and Verstappen - are covered by 0.253s, Norris is fifth, ahead of Ocon, Hamilton, Vettel, Russell and Alonso.

As has been the case for much of the weekend, Perez is out-performing his teammate, which could leave Red Bull with a conundrum tomorrow.