Perez and Leclerc slug it out in FP3 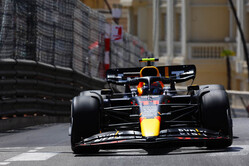 Ahead of today's sole practice session, the air temperature is 27 degrees C, while the track temperature is 49 degrees, slightly cooler than yesterday but still bright and sunny.

Charles Leclerc was quickest in both of yesterday's session, with Carlos Sainz and Sergio Perez in hot pursuit, and while Max Verstappen was fourth in both sessions the Dutchman never seemed quite at ease with the car.

Despite still suffering the after-effects of tonsillitis, Lando Norris was fifth in both sessions. Though he looked strong in FP1, Daniel Ricciardo, who looked strong in FP1 crashed out on his first flying lap in the afternoon, not only depriving him of any soft tyre and high fuel running, but adding to the speculation over his future with McLaren.

Both Mercedes drivers experienced severe bouncing but this was more about the bumpy track than porpoising.

With the AlphaTauris looking good, over the next hour we can expect a clearer picture to emerge.

The lights go green and Latifi is first out, followed by Magnussen, both on mediums.

Vettel is next out, the German opting for hards, as Schumacher and Stroll follow, on mediums.

Latifi posts a 19.375 to get things underway, as Alonso heads out on softs.

As we look ahead to qualifying, it's worth noting that rain is anticipated tomorrow, which should really shake things up.

Ricciardo heads out on softs as Latifi's remains the only time on the board.

Alonso stops the clock at 15.809 on his softs, as Bottas heads out, the Finn having experienced yet another of his difficult Friday's.

On the red-banded rubber Ricciardo goes second with a 16.232, as the Ferrari pair emerge, both running the softs also.

Sainz posts a cautionary 29.393 and Leclerc an even more cautionary 31.101, as Verstappen heads down the pitlane.

Verstappen and Perez are both on softs, and as they begin their first flying lap Russell heads out followed by Hamilton leaving Albon as the only no show.

Perez goes third (14.472), only to be demoted when his teammate posts a 14.455, the Dutchman still not looking comfortable.

All are on softs bar the Aston Martin pair who are on hards and Latifi who is on mediums.

Russell improves to 12th and Hamilton 8th, but both are over a second off the pace. Both are running the new front wing endplates.

Sainz and Perez both improve but remain third and fourth, as a 14.374 sees Gasly go sixth.

Ricciardo goes seventh with a 14.689, as he reports his biggest issue is "keeping the rear settled" and "turning on the power".

A big lock up for Tsunoda, as Leclerc reports "something weird is happening into Turn 1". Turn 1, of course, is Ste Devote, where Verstappen has been having problems all weekend.

Moments later, Leclerc equals Perez' time to a thousandth of a second.

"Check the steering, I just hit the wall," says Norris.

Told he's 1.2s down on Perez, Hamilton replies: "1.2 seconds? I don't know where that is." This comes after a hairy moment in the Swimming Pool complex.

Leclerc ups the ante with a 12.885, having gone quickest in the final two sectors.

Looking at the Mercedes it is clear that, not for the first time, the German team has gone the wrong way in terms of set-up overnight.

With 28 minutes remaining, Aston Martin has yet to run the softs, as has Albon.

A big lock-up sees Sainz head up the escape road at Ste Devote. The Spaniard has dropped to fourth, 0.606s off the pace.

Perez, Tsunoda and Albon are the only drivers on track as most head back to the pits ahead of the qualifying sims.

Already on fresh softs, Tsunoda improves to fifth with a 13.916.

Norris improves to third with a 13.226, the on-board camera revealing the intense buffeting the youngster is suffering over the infamous Monaco bumps.

"Still too much understeer," reports Schumacher. When asked where, he responds "everywhere!"

Verstappen aborts his flyer when he comes across a very slow Zhou on the racing line. Judging by the bleeps the Dutchman is not best pleased.

Russell improves to seventh with a 13.476 as Vettel gets upset with Sainz and as a result there are more beeps. The incident is to be investigated.

Despite hitting the barrier in the Swimming Pool complex, Stroll is able to make it back to the pits.

Verstappen and Leclerc trade fastest sectors, the Monegasque posting a 12.702 to go top, while the world champion fails to improve having lost time in the final sector.

"Crikey, that was very dangerous by Checo," reports Russell, "almost crashed into the back of him."

Ricciardo, Stroll and Zhou are also over 1.5s off the pace, and certainly off the pace of their respective teammates.

Vettel improves to 13th while Ocon improves his time but remains seventeenth.

Despite Vettel's obvious unhappiness, the stewards deem there is no need for further investigation of the Sainz incident.

"I don't need it, I don't want it," replies Russell when told he can have another push lap.

That was pretty much the Perez-Leclerc show, and while Sainz and Verstappen, the Dutchman, in particular, never appeared to have the confidence in his car of his teammate.

Impressive stuff from Gasly and Norris, not forgetting Magnussen, while the Mercedes pair improves in the final stages.

Qualifying is going to be fascinating.