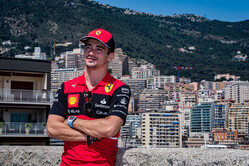 Despite his so-called 'home race curse', Charles Leclerc refuses to be influenced by previous outings and will not approach this weekend's Monaco any differently to normal.

In three outings the Monaco-born youngster has yet to score a point, last year retiring on his way to the grid despite having claimed pole position the previous day.

Those who fear the Ferrari driver is 'cursed' at his home track will have taken little comfort from his recent appearance at the Monaco Historic event when he crashed Niki Lauda's 1974 Ferrari 312B3 during a demo run.

Speaking ahead of the weekend, refusing to accept the 'curse', Leclerc, who lost the lead in the championship in Barcelona last week after suffering an engine issue whilst leading, says he doesn't intend approaching this weekend differently to any other.

"Honestly, I don't feel the added pressure of bigger responsibility this year than any other years," he told reporters. "Last year and the year before it was my, or our, responsibility to get back on top with such a big name as Ferrari.

"I just try and focus on the job and am confident that whenever we do the perfect job on the weekend we have a shot for a win this year."

Asked if his bad luck on his home track plays on his mind, he replied: "No, it doesn't, I don't think about it.

"It's not been the luckiest track for me overall," he admitted, "but that's life... it happens.

"It's part of motorsports, and sometimes things just don't go your way, and hopefully this year will. I'll just take the same approach as I've done in the first few races of 2022. Because it's been successful until now, and hopefully it will be successful here at home.

"Whether we are favourites here, I don't know," he admitted, referring to Sunday's race. "But I think that there will be surprises for this race, because as we've seen last year, our car was not that competitive over the course of the season. But we arrived in Monaco, and we had one of the strongest packages for this track.

"There might be some teams that we didn't think of that might be very competitive here, and that will surprise us. But I'm pretty sure that we'll be in the fight to win."

Meanwhile, at a time some are claiming the Monaco event's days are numbered, pointing to the glitzy new events in Miami and Las Vegas, Leclerc warned that ditching the Principality, which has hosted a Grand Prix since 1929, would be a "wrong move".

"I think it would be a bad move for both parties now," he warned. "I've never known Monaco without F1, apart from for COVID reasons in 2020.

"F1 without Monaco for me is not F1," he added. "I think F1 has a history, has some historic tracks like Silverstone, like Monza, and like Monaco too, and I think they should stay in the calendar."

Asked about modifying the circuit, which is notorious for the lack of overtaking, even more so with today's bigger cars, the youngster said: "I thought about it sometimes, whether it will improve a lot overtaking. I don't know, maybe before the tunnel you can go to the left and do a big straight there. But how feasible it is? I'm not sure.

"Of course overtaking is difficult, but I think what we all love as drivers is the challenge, especially in qualifying to do that lap, just pushing. There's no track that comes close to the adrenaline we get in Monaco, and for me it's part of F1 history and should stay in F1."