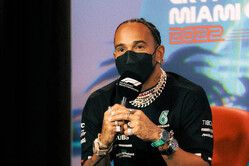 In the latest note from race director, Niels Wittich drivers are informed that watches are considered jewellery and will therefore be banned.

"In the interest of safety, watches will be considered as jewellery," states Wittich in the latest race directors note to the teams and drivers.

This comes on top of the jewellery and non-conforming underwear ban.

With drivers and teams both enjoying lucrative sponsorship deals to wear and make very obvious their timepieces, one can see this latest move not going down too well.

While drivers could make te excuse that the lack of a watch made them late for such things as the national anthem, it will be fun post-race to watch the podium finishers scramble to get their watches onto their wrists as soon as possible.

In the same note, Wittich revealed further changes to the Miami track overnight.

The kerbs at pit entry have been removed and replaced with a bollard at each apex, while the apex and the exit of turn 17 have been resurfaced.

Following yesterday's sessions a number of drivers complained about the state of the track if one went off the racing line, leading to claims that the "gravel" experienced and total lack of grip could lead to a lack of overtaking.

Another common complaint were the bumps.

"It is extremely tricky," said Lando Norris. "It is very bumpy in some areas, which is not quite what we were expecting. I think everyone was expecting it to be very smooth and beautiful, but it's not.

"The surface is very tricky because you go off line anywhere and it is pretty much game over and you end up in the wall, so it is punishing, let's say," he added. "That is why you have seen quite a few people ending up in the barriers. I feel like it isn't going to be great for racing now.

"That is the negatives, but the positives are it is still a good track."

"I am really disappointed there is no grip off line," said Sergio Perez. "It's a shame because I think the racing will be bad due to that. As soon as you try to go off line, there is no grip.

"It's wet on that side," he aded. "It feels very gravelly. Racing will be hard. I think it's going to be an interesting race. We are all in the same boat. We don't know exactly where we are," he added.