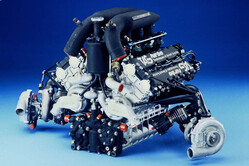 Herbert Diess, CEO of the Volkswagen Group has confirmed that both Porsche and Audi are to enter F1 in 2026.

In an interview broadcast by Volkswagen on YouTube, Diess cited the increasing popularity of the sport as the reason for two of his company's brands making the move.

"If you do motorsport, you should drive Formula 1," he said. "That's where the effect is greatest.

"Formula 1 is developing extremely positively worldwide," he added, in a nod to the changes to the sport since 2017 when Liberty Media took control.

Of course, other than the sport's increasing popularity, widely put down to initiatives such as the Drive to Survive series on Netflix, Volkswagen is attracted by F1's ever improving green credentials, not least the new engine formula proposed for 2026 which will be increasingly electric.

"You can't get into Formula 1 unless a technology window opens," said Diess. "You need a rule change to get in there.

"We assume that in '26, '28 it will still be the biggest motorsport spectacle in the world, even more so than today," he continued. "More in China, more in the USA than today and thus also the largest marketing platform for premium vehicles."

However, adding to the confusion as to why one manufacturer would essentially enter two brands which would be essentially competing against one another, he admitted that there is still the possibility of only one of the iconic brands making it on to the grid.

"Markus Duesman always tells me, you usually make up one second per season on a medium-sized race track simply by optimising details," he said, referring to the chairman of Audi and former BMW F1 head of powertrains. "But you can't catch up on that when you join a new team: you need five or 10 years to be among the front runners. In other words, you can only get onboard if you have a major rule change.

"That's coming now, and it will also come in the direction of 2026, when the engines will be electrified to a much greater extent, including with synthetic fuels. That means you need a new engine development and you need three or four years to develop a new engine.

"That means you can decide now to do Formula 1 - or then probably not again for 10 years. And our two premium brands think that's the right thing to do, and are prioritising it."

While Audi has been linked with a buy-out of the McLaren team, Porsche has been linked as a partner to several teams including Red Bull, Aston Martin, McLaren, Williams and Sauber.

Porsche would be returning to the grid for the first time in thirty years, while Audi which has been scaling back its motorsport activities, most likely due to its possible F1 intention, would be making its debut in the "pinnacle of motor sport".

Porsche, as well as being contracted to remain in Formula E until 2024, is currently in the throes of preparing for its return to sports cars in 2023 when its twin-turbo hypercar will contest a number of races including Le Mans.

"Porsche has to be the sportiest car brand in the world, so Porsche has to do motorsport," explained Diess. "And you come to the conclusion, if Porsche does motorsport, the most efficient thing is to do Formula 1. You almost have to put a check mark on that.

"Audi is a much weaker brand than Porsche. It can't demand such a high price premium. Audi actually has the better case for Formula 1 because it has much greater potential for the brand. They are moving into the higher segments, into competition with Daimler, and then Audi will also have a case where they say that makes sense. Audi also transfers four or five billion a year to Wolfsburg, and it will also transfer more with Formula 1 than without.

"Then you simply run out of arguments. You can say, 'But I don't believe in Formula 1', but there are good arguments that say Formula 1 will grow, even in the future. Why should you restrict them, if they then deliver more money?

"The discussion on the board was not unanimous," he admitted. "We certainly have other priorities strategically. It's not necessarily motorsport, but our cars have to be technically up to date, we have to be able to drive autonomously, we need the software capabilities, we need batteries for our cars. We have enough to do and we don't really need to do Formula 1.

"But our premium brands say that's the most important lever to increase the brand value and to be able to take a little bit more for the cars in terms of pricing. And also to demonstrate to the competition that you have superior technology, in the case of Audi.

"That's why the Board of Management and the Supervisory Board have all voted in favour of this. Audi still has to decide in which constellation and with which team. But both have started to develop engines."