Miami to give F1 a Super Bowl vibe, says Brown 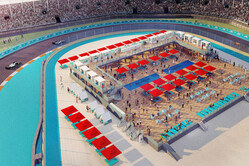 McLaren boss, Zak Brown believes that Miami is one of the best things to happen to F1, and will bring a Super Bowl vibe to the sport.

Doing what he does best - selling the dream - after all it is Andreas Seidl who has finally put the Woking outfit back on course again, Brown believes Miami is the perfect fit for the sport in the Drive to Survive era.

"It's going to be awesome," he tells Reuters. "I've been here six years and I've never seen demand or buzz for a grand prix like I've seen for Miami.

"We can easily double our hospitality and we're already the largest hospitality buyer in Miami," he adds, "it rivals the Super Bowl as far as ‘are you going to the Miami race?'

"I've been around F1 for twenty years and I'm used to going to grands prix but I've never seen anything like it," he says.

Revealing that his team will have a thousand guests, "including A-list celebrities", the team will a McLaren House in addition to Paddock Club hospitality.

With the sport supposedly already enjoying a boom, Brown is confident that the addition of Las Vegas in 2023 will continue to open up the sport to new fans, especially in the United States.

"Now you've got Vegas the sport's never been healthier and more exciting," he says. "If you look at the corporate partners on our car, half of our car are U.S.-based companies. So U.S.-based companies are now actually starting to get behind it. I think we've got a long way to go."

Fact is, Brown sums it up himself, when he says of the Super Bowl, "there's the football game and then there's the halftime celebs and shows".

In recent years, the Super Bowl, which admittedly is the among most watched single sporting events, has seen the Game become a sideshow, an afterthought as attention is focussed on the specially produced, ever more controversial TV ads and the music acts.

Indeed, as far as the actual game is concerned it is typical style over substance.

As for "A-list celebrities" these will no doubt prove to be mostly rap stars and various others who have been "turned on" to the sport courtesy of Drive to Survive.

In all likelihood it is going to be a freak show, both on and off track.