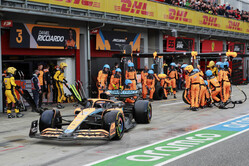 Daniel Ricciardo has taken the blame for the first lap clash with Carlos Sainz that put the Spaniard out of the race and compromised his own afternoon due to damage.

As the field funnelled through the infamous opening chicane, the McLaren pair were challenging the Ferraris who were both slow off the start line.

While Lando Norris was getting through on the inside of Charles Leclerc, Ricciardo clipped the rear end of Sainz' Ferrari sending the Spaniard spinning off into the gravel trap from which he was unable to extricate himself.

Pitting on Lap 2, on Lap 16 the Australian was the first to make the switch to slicks, a move mirrored by the rest of the field over the laps that followed.

Working his way up to 15th, a third stop saw the McLaren driver switch from mediums to hards, however, he spent the remainder of the race running last, briefly passing Mick Schumacher when the German made a late stop, only to be passed by the Haas driver shortly after.

At race end, before heading to the Ferrari motorhome to apologise to Sainz, Ricciardo publicly accepted blame for the clash.

"From memory, I think I got onto the kerb just to try and buy myself a bit more space," he continued, "because I know at some point it's going to bottle up. But I think that once I got on the kerb, I just slid off it and then started to slide up into him.

"Obviously intentions were, in a way, good to try," he insisted, "and, let's say, leave some room. But in those conditions obviously I didn't have the grip I was hopeful for, slid up into him and ruined his race as well. Then we had damage and it was a painful 60 laps.

"I'll go and see Carlos, go and see what I can do now to apologise and just try and move on for Miami."

Team boss, Andreas Seidl subsequently revealed that Ricciardo's lack of progress thereafter was due to damage to his diffuser after being hit from behind by Valtteri Bottas in the moments before the clash with Sainz.

"Unfortunately, with the racing incident in the first lap, after the damage the car had on the rear diffuser from the hit he got from the back, I think from one of the Alfa Romeos, was not a lot more he could actually do in the race," said the German.

"Disappointing for him, for us, because he had great pace," he added. "All weekend he felt comfortable in the car.

"We still tried to do an offset strategy, then going on the hards, because he was last anyway, but there was no opportunities coming up to do anything," said Seidl of the team's subsequent strategy."

"It was a difficult start as you saw," said Sainz, "but there were still 63 laps left, and even if you lose a position to a McLaren like Lando or whatever, it's still a long race to go, especially in these conditions.

"But unfortunately, I think I left plenty of space for Daniel on the inside but he decided to get on the kerb and understeer into me and that was it for my race. Very unlucky, there was nothing I could do differently there, but it is what it is.

"It's tough," he sighed. "I'm not happy, and it's tough to go through it, especially in a home race like this with all the tifosi, getting the support from them, wanting to do a good race for them.

"As I said, the start wasn't great, we will analyse why but it was still a long race ahead and for some reason, I was the unlucky guy that for someone's mistake, I had to pay. It's how it is."