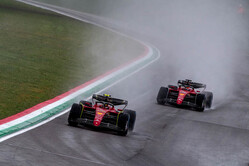 Damp, dry then really wet, with five red flags and particularlty low temperatures making it difficult to get the tyres into the ideal operating window. These were the conditions that turned qualifying for the Made in Italy e dell'Emilia-Romagna Grand Prix into a real lottery today at Imola's Enzo e Dino Ferrari circuit. The result is tinged with regret for Scuderia Ferrari, given that the potential was there for a better result. For tomorrow's Sprint race, starting at 16.30 CET, Charles Leclerc will start from second on the grid, while Carlos Sainz will be aiming to fight back from tenth place, after he ended up in the barriers in Q2.

Having got through the first part without any problems, the two drivers started the second phase on Soft tyres, with the instruction to go for a time immediately because of the threat of more rain on the way. Carlos posted a very good 1'18"990, while Charles stopped the clocks in 1'19"584, good enough for fifth fastest. Unfortunately, on his second run, Sainz went off the track at the final corner, which put an end to his session and brought out the second red flag. While his F1-75 was brought back to the pits, the rain intensified and no one manged to go quicker. Thus the Spaniard's misfortune at least allowed him the good fortune to make the cut through to Q3. But unable to continue, the Ferrari number 55 will still be able to start tomorrow from tenth on the grid.

In the final qualifying, all the drivers had to revert to Intermediate tyres: Charles posted a 1'28"778 on his first run, just a few thousandths quicker than Max Verstappen. At this point, the Monegasque decided to cool his tyres for a lap, while his rival went on another fast lap, setting a time of 1'27"999. Charles was now set to go again and make the most of the fact the track was drying out, but when Valtteri Bottas stopped at the side of the track, the session was red flagged yet again, thus denying the Ferrari driver the chance to improve. After a quarter of an hour, another stoppage, this time caused by Lando Norris, meant no one was able to improve, freezing the positions and thus robbing the thousands of Ferrari fans who were packing the grandstands despite the appalling weather, from cheering the result they had been hoping for.

The first part of the Imola game had not matched the team's expectations, but there are still two parts to go: tomorrow's 21 lap Sprint race, which assigns points to the first eight finishers and sets the grid for Sunday's Grand Prix, which starts at 15 CET and runs over 63 laps or 309.049 kilometres. The F1-75 has proved to be competitive and Charles and Carlos are really up for the fight.

Charles Leclerc: Qualifying didn't end exactly as I wanted it to, but starting the race from P2 isn't too bad. It was a tricky one. Q1 and Q2 were all about making it through to Q3 - and then pushing hard.

I did one strong lap in the last session, then decided to abort my second lap to save the tyres for my last two runs at the end of Q3. Unfortunately, that never happened because of the red flags. It's a shame, but everything is still possible. We've been competitive in all sessions so far and have the potential to fight for the win tomorrow.

Carlos Sainz: This is a very tough one to take and there is little to say other than sorry to the entire team and every fan out there. I wasn't even pushing that hard, as we had more than enough pace to make it into Q3 comfortably. The car surprised me with a snap and I couldn't stop it before hitting the wall. Thinking positively, the weekend is not over yet and I still have the Sprint race and the Grand Prix on Sunday to try to recover. It's a difficult moment but now it's time to focus on what is ahead.

Laurent Mekies, Racing Director: Even though the result of today's qualifying did not quite go in our favour, I still want to thank the team here and back in Maranello, because we have started the weekend on the right foot and we were immediately competitive. Unfortunately, today, what made the difference was the timing of the red flags. If the fourth had come out a few seconds earlier, then pole would have gone to Charles, but that wasn't to be, so it went to Max Verstappen.

Charles' second place is still a good result and tomorrow Carlos will have the opportunity to fight back after what happened in Q2. These things can happen and it's easy to understand how frustrating this must have been for him, given the potential he had demonstrated earlier. There's still a long way to go this weekend, so now we have to reset and focus on tomorrow and Sunday. The F1-75 is on the pace and we have all we need to do a good job.

A positive aspect today was that the car was also competitive on both wet weather tyre compounds. We never had the opportunity to run in these conditions and that confirms we are on the right path. Tonight we will work to identify the areas in which we can improve, because as has been the case so far this season, the fight with our main rivals will go down to hundredths of a second and every factor can make the difference.