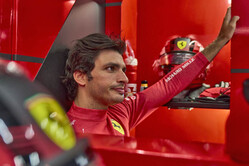 Having had his first Q3 time deleted, Carlos Sainz' problems went from bad to worse as he ended up 1.5s adrift of his pole-winning teammate.

It's debatable, but had Fernando Alonso not crashed out following a hydraulics issue which caused the session to be red-flagged, countryman Carlos Sainz might have scored the first pole position of his F1 career.

As he crossed the line at the end of a very promising lap his time was deleted. However, worse was to follow, for delays getting him out for his second run meant he was unable to get his tyres into the ideal operating window, leaving him struggling and ending up ninth on the grid.

"The lap at the end, we had a problem with the starter, we couldn't start the car," a clearly angry Sainz told reporters at session end, "we had to go out three minutes later to when we were planning to go out.

"I couldn't prepare the tyre," he continued, "I couldn't warm up the tyre. Everything was rushed, and I had to do the lap on freezing tyres. It was a horrible lap for us.

"I was incredibly unlucky, everything that could have gone wrong in Q3 went wrong, especially because I was in the fight for pole position the whole of quali.

"I'm angry," he admitted, "because we shouldn't have these problems with the starter. It was just a disaster.

"He knows I am angry," he said of team boss, Mattia Binotto, "because we shouldn't have these problems with the starter. He knows today I was in the fight for pole, and everything that could have gone wrong for me went wrong.

"So, I am not going to be happy at all, even if anyone tells me to be happy, but tomorrow is another day and we will try and come back."

Asked how he will prepare for tomorrow's race, which sees him start ninth, he replied: "With a good night sleep... that's it. I need to sleep. Until when I go to sleep, I will be angry.

"We are going to try and recover as much as possible," he added, "but we are also honest with ourselves that without the fourth DRS zone, the circuit hasn't changed that much, and it will be tricky to overtake, but I will give it our best shot."