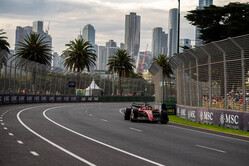 Just twenty minutes before the start of FP3, the FIA confirmed that it had removed the DRS zone between Turns 8 and 9.

It's understood that at a lengthy drivers' briefing on Friday, Fernando Alonso had raised concerns over the safety aspect of the zone.

Since F1 last raced at Albert Park in 2019, numerous changes have been made to the track in a bid to improve the racing, mainly by offering more overtaking opportunities.

The DRS zone that followed what was the old chicane was thought to offer a primer opportunity, but some drivers weren't so sure.

"Maybe if you get a really good run and you're running a lower wing level," Lance Stroll told Speedcafe. "You have to get really, I think alongside, across from the car you're overtaking.

"It can go very wrong very quickly if you touch there," he admitted, "so I think it's an opportunity to get close then maybe still a better opportunity into [Turn] 3 to overtake, I would say."

The delay in confirming the removal of the zone led to problems for a number of teams, who subsequently had to make adjustments to their cars.