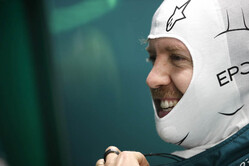 Sebastian Vettel has been fined after riding a scooter on the Albert Park track following his engine failure during FP1.

With Australians having been deprived of their sport since 2019, and so cruelly teased in 2020, when Sebastian Vettel was forced to pull off track in the final stages of opening practice following an engine issue he saw a perfect opportunity to pay his respects to the fans lining the track.

Given a scooter, once the session had ended and the track was clear, the German made his way back to the pits using the track, waving and smiling to the crowds along the way.

However, little did the four-time champion know that he was breaching Article 26.7 of the sporting regulations by riding his scooter on the track within the five-minute window after the end of the session.

According to the stewards, who fined Vettel 5,000 Euros, a marshal was at the location with a scooter and the German asked if he could drive the scooter in order to return to his pit. The marshal assented.

Vettel got on the scooter, expecting the marshal to get on behind him. When he didn't get on, Vettel departed alone, without the prior approval to do so, and while the marshal was trying to contact race control for instructions.

In driving on the track to his pit, instead of the designated route, Vettel breached Article 26.7 of the sporting regulations, which prohibits anyone from being on the track in the five-minute period after the end of a session, with the exception of specifically identified personnel, which makes no provision for drivers to have such access unless specifically authorized.

"Obviously we had a problem and there was a bit of smoke, and I lost power," Vettel subsequently told members of the media. "We had to stop the car on the track and I did the best I could to limit the damage and get it off the track as soon as possible.

"I tried to make sure the car doesn't get any further damaged," he continued. "The marshal was very helpful. He had a Leatherman and I asked for an Allen key, then we took part of the bodywork off so I could get underneath and cool the car so it was a bit of a job.

"I asked: 'Can I get back?' as soon as I knew the car was safe in terms of not catching fire again," he said. "They said: 'Yes, as soon as the session is over' and then the guy came with a scooter and said: 'You can jump on the back'.