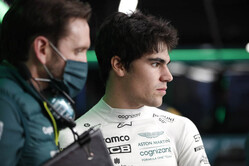 Lance Stroll has been handed a 3-place grid penalty for causing a collision with Nicholas Latifi during today's qualifying session.

The Williams driver had pulled off course to the left and slowed at the exit of turn 4 to let cars by, the last of which was Stroll.

Contact was made between Stroll's right-front wheel and Latifi's left-rear wheel, with the subsequent damage putting both cars out of the session.

The Stewards deemed that Stroll was predominantly to blame for the collision because of his lack of situational awareness of Latifi's passing manoeuvre.

In a addition to the 3-place grid drop, Stroll is handed 2 penalty points, bringing his total up to 7 for the 12 month period.

Ironically, Williams driver Alex Albon has a 3-place grid penalty this weekend for causing a collision with Stroll in Saudi Arabia.

The penalty is the latest blow in what is rapidly becoming a weekend from hell for the Silverstone-based outfit.

Having missed the first two races after testing positive for COVID, Sebastian Vettel suffered an engine issue on Friday morning which kept him out of the afternoon session. This morning, both he and Stroll were involved in separate incidents leaving their crews with the task of repairing their cars in time for qualifying.

Whilst Stroll was subsequently involved in the clash with Latifi, the delay caused by the subsequent red flag allowed the team time to fully repair Vettel's car, the German managing just one flying lap to claim 18th on the grid.

However, having already been hit with a fine for riding a scooter on track on Friday, the four-time champion was handed another fine for speeding in the pitlane in his bid to get out on track in time to complete that one flying lap.