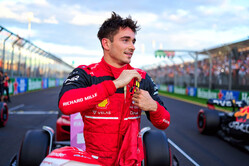 Ferrari driver (and championship leader) Charles Leclerc took his second pole of the season, having made the most of the P Zero Red soft tyre, which was used from start to finish of qualifying by the whole field. Leclerc was the only driver to get below the 1m18s benchmark on the redesigned Albert Park track this year, which is now faster and more challenging.

The qualifying session - which was interrupted by two red flags - got underway in ambient temperatures of 26 degrees centigrade and track temperatures of 31 degrees. By the end of qualifying an hour and a half later, track temperature had dropped by four degrees. McLaren's Lando Norris went fastest in the FP3 session earlier this afternoon, ahead of Alpine's Fernando Alonso: again on the soft tyre. The P Zero White hard and P Zero Yellow medium were also run in FP3.

The Pirelli Pole Position Award was given out by two-time MotoGP champion Casey Stoner, from Queensland in Australia. Stoner, who retired from MotoGP at the end of the 2012 season, has also raced on four wheels in V8 Supercars. Leclerc claimed the 11th pole position of his career and his second of the 2022 season, lining up alongside Red Bull's reigning champion Max Verstappen on the front row.

On the face of it, the quickest strategy for the 58-lap race tomorrow is a straightforward medium to hard one-stopper. The characteristics of the soft tyre made it the default choice in qualifying while starting on the medium opens up the widest range of options, with warm and dry weather expected on Sunday. Now that the drivers are no longer obliged to start on their fastest Q2 tyres, there's a lot more flexibility, which they are all keen to take advantage of. However, there's still an element of unpredictability. We have an extensively revised circuit around Albert Park with smooth new asphalt, which is constantly evolving. And some of those revisions mean that there are unforgiving walls in close proximity with rapid corners. So a safety car is far from out of the question. That could reset the strategies entirely, opening the door to a two-stopper with perhaps even the soft for a final run, depending on the timing of the pit stops and the race circumstances.

Mario Isola: "We witnessed a long but exciting qualifying session, with the frontrunners separated by just one-thousandths of a second on more than one occasion, and pole decided in the closing seconds. As expected, the drivers used the soft tyre from start to finish today to take advantage of its extra speed. Not only that, but the drivers were also able to complete more than one flying lap on it to extract the most performance: something they had previously established by running it extensively in free practice earlier this afternoon. It was quite windy then, with a change in the wind direction compared to Friday, which obviously affected aerodynamic performance by making the cars more snappy. What we have seen so far in qualifying shows that it was the right choice to come here with two steps between the soft and the medium compounds, which has enabled the performance gaps between hard, medium and soft to be about equal. Tomorrow should be a one-stop strategy using medium and hard, but as we saw today, the action here can be quite unpredictable."