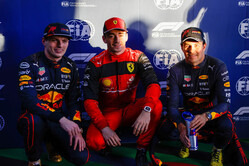 Well, Max Verstappen Max second position, how do you feel after that run?
Max Verstappen: Yeah, not good. I didn't really feel good in the car the whole weekend. So far, I think there's not been one lap where I actually felt confident. So, bit of a struggle. Of course, second is still a good result. But yeah, just not feeling that great to go to the limit, so we'll try to analyse it.

It seems to be a bit of a theme for you. I know yesterday you were complaining a little bit, a little bit this morning. But what about race pace? Is that where it's going to be slightly different? Do you think you think the balance or come to you?
MV: Yeah, well probably with the race pace everything stabilises a bit. But for me this weekend so far has been all over the place. Of course, happy to be second. But of course, I think also as a team, you know, we want more.

Thanks, Max. Sergio, third position after that brilliant position you had in Saudi? How did it feel today?
Sergio Perez: Yeah. It felt good. Q1, Q2 things were going good. You know, with all the red flags it is always very hard to keep the momentum going. I regret a bit the decision we took going into Q3 without a strategy on the tyres. But I think yeah, P3 is a decent start for tomorrow.

And this must be so good for your motivation. Got a pole position, but frustration in the race in Saudi. Third here tomorrow. Second row. Feeling good with the race pace of the car?
SP: Yeah, hopefully. I think we got a nice race ahead of us. First of all, I hope we make a lot of Aussies very happy tomorrow, because I mean, full grandstands already on Saturday, so yeah, hopefully tomorrow, we can give them a nice race.

And your pole man, everybody, Charles Leclerc! Second pole of the season. How did that feel? That looked like an epic lap from you. How was it?
Charles Leclerc: Yeah, it felt good. I mean, even more, because it's a track where I've always struggled in the past as a driver. I don't know, it probably doesn't fit me as well. And this weekend, we really worked hard. It was a bit messy for the three free practice sessions for me. I managed to do some good laps, but not everything together. And yeah, in Q3, I managed to put everything together. So it feels great. Yeah very happy to be starting on pole tomorrow.

It's a great position, obviously to be in pole position, sandwiched by the two Red Bulls. But you've been on the pace basically all the way through yesterday and today and now with that pole position. For the race? How do you feel the car is set up? Because when I see her on track, she looks nice to drive. Is she?
CL: Yeah, the car is nice to drive but the Red Bulls were very quick, in FP2 during the long fuel run, but to be honest, we were again quite surprised by our pace in qualifying. So everything is possible tomorrow. We just need to do a good start. And then hopefully we can keep that first position.

Many congratulations to the top three qualifiers for the FIA Formula 1 Australian Grand Prix. in third place Sergio Pérez. In second place, Max Verstappen. And taking the 11th pole position of his Formula 1 career and his second of the 2022 campaign our pole position man, Charles Leclerc. Charles, you left it late. It looked like a huge lap right at the end of Q3. Just talk us through it.
CL: Yeah, it was a good lap. This time I took quite a bit of risk, especially in Turn 6, which was quite tricky. I wasn't really on it during qualifying on this corner, just doing some mistakes, and then in the last Q3 laps, I managed to make it right. And I think I gained quite a bit on myself compared to the other laps. But yeah, I'm very happy with the lap and especially on a track like this, where I've always struggled in the past and also free practice for me, even though we were competitive, it was very difficult to put a lap together and I was just doing quite a bit of mistakes. So I was working on consistency and managed to put that lap together in Q3. So very, very happy. And yeah, it's good to be starting on pole tomorrow.

Can you tell us a little more why is it proving so difficult to put a lap together on this reconfigured Albert Park circuit?
CL: I mean, to be honest, I think I was struggling also at the previous layout. I've always struggled with these type of corners that are not really 90 degrees, but it's just a bit strange. And yeah, I've always struggled with my driving style here. But I think it's also an overall thing for all the drivers. It's a very tricky track, a very challenging track for drivers. And it was even trickier with the sun. The sun in Q2, we just couldn't see anything. In Q3 a little bit better, on the first run was good, second run wasn't. It was a very tricky session.

So you hooked it up in qualifying, just give us a little bit of an indication about the race pace of your car.
SP: I mean, it doesn't look too bad. I think we are, again, very close with Red Bull. So it's going to be a close race tomorrow.

Max coming to you now. Once again, extremely close between yourself and Charles. Just how clean was that final lap for you in Q3?
MV: I don't know if three-tenths is close, but nah, it's been terrible for me the whole weekend so far. Just not a good balance, all the time chasing something, and I never felt comfortable for one lap - except the long runs. But yeah, it's just been a big struggle and clearly, we didn't really seem to fix it, even in qualifying. I just struggled a lot with the balance of the car, and it just doesn't give you confidence to push. My first run in Q3 started to feel a bit better and I was actually hooking it up, but then I lock up again in one corner, just because of a random balance shift. So, it's not been great, to be honest.

You sound a little frustrated but let's look ahead to tomorrow then. Three DRS zones for the grand prix. What are your thoughts on overtaking opportunities around the track?
MV: Well, of course, with taking away one DRS zone, it's going to be harder. I don't really understand why they took it away, because it was much safer than what we do in Jeddah, for example. So, it's a bit of a mystery to me why that happened. But yeah, we'll give it our best. I mean, normally in the race, you know, the car stabilises a bit more, and it's not so peaky, compared to finding the grip in qualifying. So, it naturally should be a little bit better. And I think my long run yesterday look quite good in terms of how I felt. So hopefully, it will be the same tomorrow.

Checo, coming to you. Back in the top three on the grid. Well done. Just how happy were you with the performance of your RB18?
SP: It was tricky. I think the whole Qualifying was like... I never really felt that I was knowing which strategy was the best in terms of the tyres. I think the tyres have been very sensitive to the asphalt. It is the first time we run the C5 compound, so that was a little bit hard. I think Q2 went well - but then into Q3, with the red flag, we were not able to do our third lap. So we went again for the same strategy, but unfortunately, we carried the extra fuel that we really didn't need, just to find out that the third lap was not any better.

The track temperature was dropping continuously during the session. Did that create a tyre warmup issue for you?
SP: No, not really, it was small. I think the biggest thing was the sun. It was coming down a lot and then getting darker. So, we were playing with the visors quite a lot on my first Q3, run one. It was completely dark and there was no sun, so I went back and then there was a lot of sun. So, didn't get it right, the visor.

Just quickly, looking ahead to the race tomorrow, what's the plan for you?
SP: To have a good start and to fight these two guys, and hopefully, give a good race. And hopefully we can enjoy it. It's going to be very close, hopefully, tomorrow.

(Alex Kalinauckas - Autosport) It's a question to Charles, please. Charles, congratulations on pole position. You mentioned the difficulty with the sun and visibility. And we heard you after Q2 asking for a darker visor. How much of a difference did that make? And also, just generally, how difficult was it even after that with the sun? Thank you.
CL: Honestly, in Q2, my first lap in Q2, it's... I took a lot of risk there because I had no idea where was the limit of the track. You are just guessing a little bit, and it's just with the rhythm of the weekend, you know more-or-less that you need to turn here. But I really had zero idea where was the limit of the track, and it was very tricky. So, then we went for a darker visor, I think the first run in Q3, there was some clouds around, so that was perfect. And then for the last run in Q3, braking for Turn One was still very, very bad. But I don't think we can do anything. Even with the darkest visor, it's still not enough. And it will be too dark for the rest of the track where there are the clouds. So, it's just a compromise that we had to find - but it's the same for everyone in the end, but it was definitely extremely tricky. And the last sector also on Q3 lap, on the last Q3 lap, I lost a little bit, but just because it was very difficult to see where I was.