Hamilton to change his name 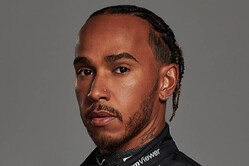 Lewis Hamilton has revealed that he is to officially change his name in order to incorporate his birth mother's surname, Larbalestier.

The seven-time world champion revealed his intention at Dubai's Expo 2020 event, telling the audience: "It would mean the world to my family.

"It would mean a lot to me knowing that, for example, I am really proud of my family's name, Hamilton," he continued. "None of you might know that my mum's name is Larbalestier and I am just about to put that in my name.

"I don't fully understand the idea that when people get married the woman loses their name, and my mum, I really want her name to continue on along with the Hamilton name."

Asked when he will go through the process, he replied: "Hopefully soon, I don't know if it will be this weekend but we are working on it."

Following a tough test in Bahrain, with days to go before the season kicks off, the Briton revealed that he will be speaking to his engineers by phone tonight.

"I'm really hoping that when I get off the call this evening, they've found some tricks, found some ways to extract more out of this car," he said.

"There's a lot of cars that are looking quite fast. Alfa Romeo were looking fast, Valtteri was looking quick," he added. "Obviously the Red Bull looks ridiculously fast at the moment, and the Ferraris.

"But we are the best team, undoubtedly," he laughed.

Asked about his 'radio silence' in the aftermath of Abu Dhabi, he replied: "I had to unplug.

"Just so you know if any of you want to do it, unplugging from social media is a really, really good thing," he added. "I missed everyone that follows and supports me, but I really needed the time to re-centre, refocus.

"I was with my family, trying to be the best uncle I can be and just create memories in the family rebuilding and I've come back to fight."