"We have hurdles to overcome," says Hamilton 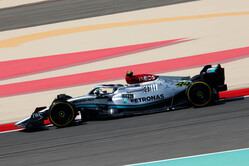 Seven-time world champion Lewis Hamilton says that currently Mercedes is not in a position to challenge for wins, far less the title.

Of course, F1 fans from the pre-Drive to Survive era will be aware that this is a common ploy of the German team, which despite piling up the titles, the wins, the points, the podiums and the prize money always plays down its chances.

Earlier in the week, as George Russell adopted the team mantra of bigging up the opposition, this time Ferrari, Carlos Sainz was having none of it.

"It's typical Mercedes, typical George," said the Spaniard, "hype up the others then come to the first race and blow the competition away.

"If it would be the first year they've done it then I would maybe believe them," he added, "but they've done it for five, six years now and they keep surprising us in the first race. So, as you can imagine, I don't believe much. Already in GPS, you can see also what they're doing."

However, speaking at today's press conference, Hamilton, who, like Russell, has appeared to struggle with the W13, insisted that all is not well.

Asked what he believes his team's chances are, he replied: "It's a little bit too early to get into that kind of... or have those kind of thoughts.

"At the moment we don't think we'll be competing for wins," he continued, "but there is potential within our car to get us there. We've just got to learn to extract it and fix some of the problems, which is what we're working on.

"But we have some hurdles to overcome," he admitted. "Obviously next week we'll get a much better showing of the pace, but I think people will be surprised.

"People keep talking about us talking ourselves down, but it's a bit different this year," he insisted.

As we know the team has history. Last year it was singularly unimpressive in testing, only to blow away the opposition weeks later at the season opener.

"It feels a lot different,” he replied, when asked to compare his thoughts heading into this season compared with this time twelve months ago. "I don't think it's going to look as good as it did last year with the difficult session we had in practice and then switch over to the race.

"I think we have far bigger challenges this time, and they're not one week turnarounds. I think they will take a little bit longer. From what I'm told, we have a considerable amount of pace to find."