"There's going to be a lot of debate," admits Brawn of Mercedes upgrade 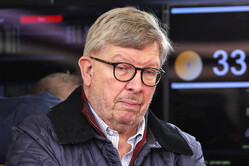 Admitting surprise at Mercedes radical approach to the 2022 regulations, Ross Brawn says he expects the W13's controversial sidepods will create a lot of debate in the F1 paddock.

While the debate over whether Christian Horner has really questioned the legality of the Mercedes continues, F1 MD, Ross Brawn, admits that he, like everyone else, was caught out by Mercedes latest reaction to the 2022 regulations.

"There's no doubt that Mercedes concept is one we didn't anticipate," the Briton told F1 TV, "it's a very extreme interpretation of the regulations.

"I think, inevitably, there's going be a lot of debate about their interpretation," he continued. "That's what happens with new regulations, however hard you try to close off all the options, and believe me, we closed off hundreds of them, as I say the innovation in F1, it's always extreme.

"From our perspective, it's largely about does it affect the objective of the regulations?" he said of the W13's upgrade, most notably the 'missing' sidepods. "From the teams’ perspective, they want to be sure that no one's taken an interpretation that they don't feel is correct. So I think there's going to be a lot of debate in next few days.

"It's impressive," admitted the ultimate poacher turned gamekeeper "I think this is the great thing about the innovation of F1, it's just keeping it within boundaries which are sensible, there are no compromises as I say, in terms of the objective of what we wanted to achieve.

"You have to be fair," he continued, "when a team comes up with an idea, with innovation, with novelty, you shouldn't penalise it straight away.

"But of course, a team may come in and raise an objection that the FIA hadn't considered. And then you have a problem. And I've been through that many times where your idea is okay, the FIA agrees it's okay. But then a team comes in with a perspective that had never been considered and have an argument that's valid.

"So I'm sure there's going to be a lot of discussion about it. But it's impressive for a set of rules, which everybody said was too prescriptive. We're seeing all these solutions."

However, the man whose double diffuser caught the rest of the grid on the hop back in 2009, says that under the sport's revised governance the regulations be 'adjusted' over the course of the season.

"One of the significant things that we changed was the governance in F1," he said. "Because in the past you needed everybody to agree to a change in the season, now you can make a change with 80% of the teams agreeing, as long as the FIA and F1 also agree.

"Once the interpretation that Mercedes have made has been understood, then we can get a balanced view or we can take a view on its impact, what effect it's going to have, because spirit is such a grey area.

"At the end of the day, you have to go on what the wording of the regulation is, because if you take it to a court, that's what they judge it on. But that wording can be changed. With an 80% team majority, we can change the wording. So if something has slipped by, then the teams are aware that that could happen. And that can happen live during the season. So we need to see how this one plays out."

That said, Brawn insists that nothing he has seen thus far looks likely require such a drastic move.

"It's impossible to anticipate the creative scope of the teams," he said. "Once they get the regulations, you've got a thousand engineers working on all the regulations, and they can use them.

"So some of the solutions quite honestly, we never anticipated. And I think we will go back into investigating those solutions, and make sure they maintain the objective of the new rules. I think they do.

"Our initial impressions are that there's nothing here that we would be overly concerned about in terms of those objectives of the regulations. And so it's just fascinating to see such a wide range of solutions.

"And what's I think become a step change for the teams is a lot of new cooler innovation, a lot of new innovation in the heat exchangers, and the radiators, that has become available, as it's given them more scope to create the designs they've got."