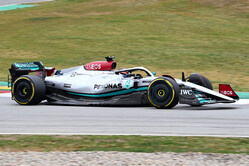 While Mercedes has been affected by porpoising more than most, other teams are suffering the phenomenon which George Russell believes is a safety concern.

"I think you can see some quite substantial issues with the cars on the straights with the bottoming," said the Mercedes driver, who looks set to post the fastest time of the Barcelona test.

"So this is a compromise we need to find to go quickest around the lap," he added. "It's something I don't think any team has experienced before. We're seeing some interesting things out there.

"From what I've seen of other teams in particular, it would be a safety concern, so that does need to be sorted one way or another," he warned. "But there's a lot of intelligent people up and down this grid, and I'm sure everyone will get on top of it sooner than later."

"It's a whole new world and understanding that we need to get on top of, because it looks like it could be a topic for this year," added Carlos Sainz.