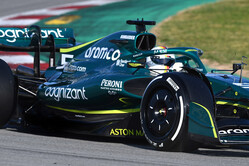 Sebastian Vettel says Aston Martin's 2022 car is a "completely different car" compared to its predecessor as he seeks to get used to the new car.

The Silverstone-based outfit has been playing the Barcelona test cool thus far, opting not to issue any daily updates.

However, one of several teams splitting driver duties on each day of the test, Sebastian Vettel and Lance Stroll have been racking up the lap count.

Like fellow multi-champion Lewis Hamilton, Vettel is heading into his sixteenth season in F1, and like the Mercedes driver has seen many changes over those years. However, he believes this year's changes are the biggest he has witnessed, admitting that the AMR22 is entirely different to its predecessor.

"In all honesty, there's still an awful lot to understand," said the German. "It's a completely different animal and it wants to be tamed in a different way.

"That's driving the car," he continued, "but that's also operating, in terms of set-up. We've tried a couple of things.

"There are some major challenges, like others are also facing, and problems," he admitted, no doubt referring to the porpoising drivers are experiencing. "So yeah, we need to find solutions.

"I can't say at the minute we're seeing the peak, but I think the challenge is fun, and the belief is there that one day we will reach that peak, hopefully just before the season.

"I think it's going to be a long year anyways, and everybody's probably in the same boat in terms of learning these cars and having certain troubles. But so far, all is good."

Asked about the porpoising, he said: "Obviously the car likes to be lower to the ground, and that's different to the past, but we've seen other cars bouncing a little bit up and down on the straight... we have one of them.

"We are just in the middle of learning, and at this stage it's hard to say whether we're better off or worse off than the others.

"It's very different," he said of the 2022 car. "It's a very different position in the car. It's different what you see, because the wheels are bigger, the fairing on top. You get used to that stuff quite quickly. But like I said, the driving is different. And I'm still playing around.

"Obviously, not every lap is exactly the same. So you need to pick your battles. But yeah, overall, it's okay, it's coming along. But where we are, I don't know."