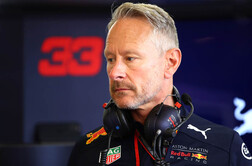 In a new documentary, Mercedes boss, Toto Wolff claims that former race director, Michael Masi was 'turned' by Red Bull boss, Christian Horner and the team's sporting director, Jonathan Wheatley over the course of the 2021 season.

For those unfamiliar with the term, to turn is to "induce or persuade a person to act against their country, former associates or employer etc", it’s the thing of countless spy novels.

Well, according to Toto Wolff, Michael Masi was 'turned' by Red Bull, hence some of the Australian's more dubious decisions last year, particularly in Abu Dhabi.

Clearly seeking to ride on the coattails of the ever controversial Netflix series, Drive to Survive, Sky Sports has put together a two-part documentary called Duel: Hamilton vs Verstappen.

Yes, the same team that ramped up the hysteria and conspiracies last year are still at it, and showing no signs of letting go of what they clearly see as a good little earner, the televisual equivalent of clickbait.

Speaking in the documentary, Wolff describes the relationship between Wheatley and Masi as a "bromance", which eventually led to the Australian turning.

"Jonathan Wheatley has done his job," declares Wolff. "He's turned Michael Masi the race director, not only in Abu Dhabi but before, and probably Max owes him a lot.

Referring to Abu Dhabi, Wolff says: "It's like a football game that is 1-0 for one team and suddenly the referee says, 'now it's golden goal. 0-0, whoever scores the next goal wins'... and by the way, we have to play without boots.

"I feel for Max," he adds. "He merits the world championship, but there's only talk about Abu Dhabi."

Referring to Masi, he says: "I haven't spoken to him and I don't want to speak to him ever again," concluded the Austrian."

Ignoring the fact that only last week Wolff said that he wants to "move on" from Abu Dhabi, the fact is that Sky is clearly stirring the excrement for all it is worth.

The oh-so-partisan commentary team will no doubt spend much of next week's test coverage and the race weekend(s) that follows going over and over and over what happened that night in the desert.

A clear sign of Sky's intentions were witnessed only last week, when Lewis Hamilton stood outside the Red Bull garage, the seven-time world champion giving the RB18 the once over. Though the Briton was merely looking at the car, having visited every other garage in the pitlane, the Sky team was breathless in its eagerness to claim that Hamilton's eyes never met with Verstappen's.