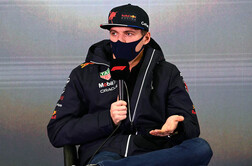 As Toto and Christian seek to bury the hatchet, Max Verstappen hits out at the sacking of Michael Masi.

While the Red Bull and Mercedes team bosses might be hoping for a period of detente following last year's hostilities, and in particular the controversy of Abu Dhabi, the media shows no sign of moving on.

At today's FIA press conference, Mas Verstappen was asked his opinion of the decision to sack race director Michael Masi, a subject that continues to divide the sport.

"It's not correct," he replied. "Everyone always tries to do the best job, everyone can always use help. Us drivers, we have the whole team behind us, we prove it ourselves.

"For me, it's very unfair what happened to Michael," he continued, "he was really being thrown under the bus. That they sack him like that in the first place for me is unacceptable, and now basically they sacked him is really incredible.

"After Charlie died it's very hard to take over from someone like him," the Dutchman continued. "He had so much experience from the previous years, and also Charlie had help around him. Maybe Michael just needed a little bit more.

"Everyone needs experience. When I came into this sport, my first year, if I look back at it now, I'm a complete rookie.

"I'm so much better than what I was back then and I think it would've been the same for Michael. So, to immediately sack him, for me, is not the right decision. But I wish him all the best with whatever comes next and I hope that it is better than being F1 race director."

The world champion is happy that team are to be prevented from lobbying officials during races - the calls from his team's boss and sporting director believed to have played a crucial role at Yas Marina.

"People talk a lot about what was decided in Abu Dhabi, but can you imagine a referee in whatever sport has the coach or equivalent screaming in his ear all the time?" said the Dutchman. "Let's say: yellow card, red card, no decision, no foul. It's impossible to make a decision.

"So, I think in the first place that F1 already allowed that, that team members could talk to him about making decisions was very wrong. It needed to be Michael making the decisions on his own and having people screaming in his ear was difficult."

Now maybe we're mistaken, but wasn't Max one of many drivers calling on their teams throughout the season asking for them to complain about the antics of rivals to the race director?