We had obstacles to overcome, says Hamilton 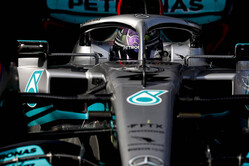 Despite posting the fastest time of the week and completing a serious number of laps, Lewis Hamilton insists the opening test hasn't been plain-sailing for Mercedes.

With Friday afternoon dedicated to wet running, it was always likely that Mercedes would leave Barcelona with the best time of the week courtesy of George Russell's 1:19.233.

However, in the final stages of the afternoon, Lewis Hamilton bolted on a set of the C5s, the softest tyres in the Pirelli range, and went quicker, crossing the line at 1:19.038. He subsequently looked set to go even quicker before opting to abort the lap.

Though the German team has been among those most affected by the porpoising phenomenon, which is set to keep the boys at Brackley busy for the coming days, it appeared to be a trouble-free test for the world champions.

Not so, insists Hamilton.

"It's been an interesting few days," he told reporters at the conclusion of the three day test. "It’s not been the easiest, or the most smooth.

"We've definitely had some obstacles to overcome," he added. "But we've got through as much as we wanted. Of course we can always do more laps but I'm happy with today's. I think I almost got 100 laps in today, so for half a day's running, that's not too bad.

"We're a little bit behind on the last two days," he continued. "The car's a lot different to previous years to drive, as are the tyres, but we're working our way through it."

Traditionally, Mercedes rarely shows its hand in testing, certainly in the first test, but leaving Spain with the best time and the second-highest mileage sends a clear message to the likes of Red Bull.

Yet while, George Russell warns that Ferrari and McLaren are looking to be a threat, Hamilton plays down talk of a pecking order beginning to emerge.

"You never find out on the first week," he said. "You never do... we have no idea where everyone is.

"But the whole team have done an amazing job this week. The men and women back at the factory have done an awesome job, so we just need to download all this data and just get through as much as we can next week and just put one foot in front of the other."