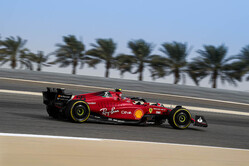 Despite widespread speculation that Ferrari could start the season as favourite, Carlos Sainz believes Mercedes is deliberately holding back.

Consistently worrying the top of the timesheets, other than pace, the Maranello pair have impressed in terms of mileage and reliability, leaving many to believe the Italian team is on the cusp of a revival.

However, Carlos Sainz, who has looked impressive throughout testing, and indeed for much of last year, isn't falling for the hype and believes Mercedes has yet to show its hand.

"It's typical Mercedes, typical George," the Spaniard told reporters, "hype up the others then come to the first race and blow the competition away.

"If it would be the first year they've done it then I would maybe believe them," he continued, "but they've done it for five, six years now and they keep surprising us in the first race. So, as you can imagine, I don't believe much.

"Already in GPS, you can see also what they're doing," he added, referring to speed traces that suggest the German team has yet to turn the dial to 10, far less 11.

However, Lewis Hamilton insists that Mercedes is currently the underdog.

"I think Ferrari, from what I can see, today Ferrari would probably be getting a 1-2 or maybe Red Bull," said the seven-time world champion.

"We'd be really, really good if we were having all these oversteer moments and having this tacky driving just to hide our cards," he added. "But it's not the case, no. We have things that we're trying to get through. As I said, others are struggling less.

"Who knows," he continued, with just a hint of a smile in his eyes, "maybe when we get to next week we'll have a better understanding."