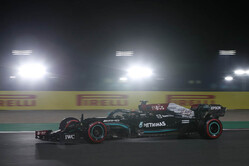 Valtteri Bottas was quickest in this morning's session, just as he was yesterday evening. Unlike yesterday however, when teammate Lewis Hamilton complained of being "slow", this morning the world champion was bang on the money.

While Max Verstappen was only 0.3s off the pace, we all know that 0.3s is pretty much a lifetime in F1.

Despite liking the track, the Dutchman doesn't look comfortable, though his continuing rear wing issues are not helping. This morning, as was the case yesterday, the upper element of his rear wing was oscillating wildly and that must surely influence the car's performance and the driver's confidence.

Also, the Dutchman was one of several drivers to incur damage after running wide and going over the unforgiving kerbs, as the FIA continues to tinker with the track limits.

With Alpine also looking good, that particular battle, much like the one between McLaren and Ferrari, looks likely to continue to entertain, albeit without the politics of the Red Bull/Mercedes battle.

Having missed FP2 due to a change of chassis, Nikita Mazepin was sidelined again this morning after his team was forced to change his control electronics.

While the drivers are enjoying the Losail circuit, its lack of landmarks makes it almost impossible to tell one corner from another, which is probably why the FIA is changing the rules so often.

With only one DRS zone and one genuine overtaking opportunity, a good grid position is vital, hence there is much to play for over the next hour.

Traffic is likely to be an issue also, particularly in Q1, but this has become the norm of late.

The lights go green and understandably Mazepin is first out, followed by his Haas teammate.

"Thank you very much for getting me out, guys," says the Russian.

The Haas pair are soon joined by Vettel, Russell, Stroll, Raikkonen and more, everyone on softs.

"Massive vibration," reports Raikkonen as Gasly heads out on mediums.

As Mazepin posts the first time of the afternoon, a 30.390, his front wing appears to be askew.

Schumacher has his time deleted.

Sainz goes quickest (23.323), ahead of Leclerc, Vettel and Gasly as the Bulls and Black Arrows head out.

Norris goes quickest in S1, but Perez and Hamilton are also on hot laps.

As Bottas goes quickest in S1, Alonso goes third overall with a 22.588.

In quick succession, Tsunoda, Leclerc and Norris have their times deleted.

Quickest in the two final sectors - and with no oscillations - Verstappen goes quickest by 0.020s.

As the clock ticks down, Leclerc weaves his way through the traffic jam that is building.

All bar the Bulls are on track as a number of drivers show their frustration at the traffic.

Russell makes it by the skin of his teeth, however no such luck for his Williams teammate who failed to get in a final flying lap.

Russell is first out for Q2, followed by Ricciardo, Leclerc, Norris and Sainz.

The Mercedes pair are also keen to get to work,

Most are on mediums, but Gasly and his teammate are on softs, as is Russell.

Bottas is told that his main loss is Turn 4 where he is attempting to carry too much speed.

"Nine-tenths, I don't know to be honest," admits Leclerc, who is currently at the bottom of the drop zone. He's in good company however, because Norris, Perez and Ricciardo are currently outside the top ten.

Russell remains thirteenth, and with 3:51 remaining the Briton is up against it.

Norris and Ricciardo head out, now on softs, as does Perez.

Only Bottas and Sainz stick with the mediums.

A PB in S1 from Norris, Leclerc also, while Stroll has a poor opening sector.

Sainz remains eighth, but is demoted by Norris. Leclerc can only manage eleventh.

Verstappen goes quickest in S1, while Ricciardo can only manage 13th.

Alonso goes third, while Perez can only manage eleventh, a disaster for Red Bull.

Sainz makes it by the skin of his teeth, while Hamilton and Verstappen, having shown strong pace both abort their laps in order to stick with the mediums.