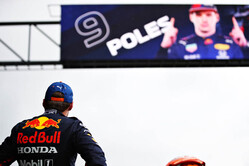 If you thought conditions were difficult earlier, they have very much deteriorated over the break.

Max Verstappen was quickest earlier but in all honesty such are the conditions it is almost impossible to anticipate what we might expect over the next hour.

And therein lies the fun, for as much as Ross Brawn and his buddies seek to spice thing up with gimmicks, it is only the likes of the Weather Gods who can throw the genuine surprise.

While there was rain for much of the two hours since this morning's session, with around half-an-hour to go it eased, then stopped. For a brief moment the sun appeared, only to disappear again.

They are playing with us... let's just hope it is worth it.

To recap, Bottas and Stroll both have penalties following their silliness in Hungary, while Hamilton is running a much fatter rear wing than his teammate. At Ferrari, Leclerc is running a new chassis after damaging his previous car in FP2 yesterday.

In the moments before Q1 it begins to rain again... and it's heavy. Indeed, the start of the session delayed.

Twelve minutes later than originally scheduled the lights go green. There is already a queue of cars at the end of the pitlane.

As they head out, Russell is told there will not be any further rain for the next 15 minutes. All are sporting full wets bar the Williams pair who are on Inters.

Benefitting from the fact that he is in clear air, Russell is setting a blistering pace on his Inters until he comes across his teammate who has spun at Turn 12, thereby bringing out the yellows.

Russell subsequently crosses the line at 2:11.727. Gasly and Hamilton both go quicker, but only just so perhaps it is already time to switch to the green-banded rubber.

"We're going to box at the end of this lap because the Inters have posted the fastest time," Perez is advised.

Wobbles for Hamilton and Verstappen.

Perez isn't the only one who pits, for with an eye on the Williams pace almost everyone switches to the Inters.

Advised to switch to Inters, Alonso responds: "Wait!" The Spaniard is currently ninth.

Indeed, Bottas is advised that "rain in imminent".

Sainz goes quickest in S1, but Russell goes quicker. As does Russell.

Leclerc goes top with a 2:01.485, but Russell and then Verstappen go quicker.

The timing screen lights up like a bagatelle, as Norris goes quickest.

Schumacher goes 15th, while both Aston Martin drivers are in the drop zone.

Hamilton goes quickest in S1 as Stroll improves to ninth.

Despite a lock-up at the chicane Hamilton improves to second with a 59.218.

Ricciardo improves to 12th but is it enough.

Tsunoda fails to improve as do the Alfa Romeo pair.

Perez goes fourth and Vettel seventh in the final moments.

With an eye on the sky the drivers are lined up in the pitlane for Q2, Inters are the order of the day.

Sainz is advised that rain will arrive five minutes into the session. All are on new Inters bar the Mercedes pair who have opted for used rubber.

However, Hamilton is subsequently told to pit for new Inters.

Like Russell in Q1, Norris takes full advantage of the fact that he is in clear air. He crosses the line at 57.235, while Russell responds with a 58.698.

Ricciardo can only manage fifth, 1.758s off his teammate's pace.

Verstappen goes second and Perez fifth, leaving the Mercedes pair as the only drivers still to post a time.

Having gone quickest in S1, Hamilton subsequently backs off as does teammate Bottas, they post 2:08.935 and 2:11.580 respectively. Could it be raining again?

Sainz goes quickest in S1 and Verstappen in S2.

Hamilton and Bottas both pit for fresh Inters, the Briton currently 10th and the Finn 12th.

The stewards have noted an incident involving Sainz and Ocon at the chicane.

"We need this lap," Hamilton is told.

Hamilton goes quickest in S1, while Norris sets the pace in S2.

"That was way too close," admits Hamilton.