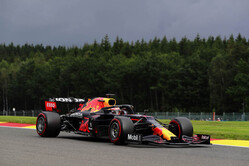 Despite intermittent rain throughout the day, the Cinturato Green intermediate tyre was used only for installation laps (allowing an extra set of intermediate tyres under the regulations) before the drivers switched to P Zero slicks. Red Bull's Max Verstappen set the fastest time of the day in FP2 on the P Zero Red soft C4 tyre: the same compound that Mercedes driver Valtteri Bottas used to top the timesheets at the end of FP1.

Verstappen was quickest for a large part of the FP1 session as well: impressively he used the P Zero White hard C2 tyre to stay in front of several drivers behind him on the soft.

Track conditions were far from ideal today: although there was dry running for most of the day and there was already some rubber on track from the Spa 24 Hours at the beginning of the month, the damp and inconsistent surface (with track temperatures at around 20 degrees) meant that drivers struggled for grip. The FP2 session was interrupted by two red flags, as both Ferrari's Charles Leclerc and Verstappen went off.

Mario Isola: "We experienced typically variable weather at Spa, and that seems set to remain the case for the rest of the weekend! If it rains, it will be important for teams to consider the crossover point from wet weather tyres to slicks and vice versa. The track remained tricky all day and we saw drivers struggling to find a consistent lap time in these mixed conditions, which is why it's also quite hard to get an idea of the true performance gaps at the moment. Nonetheless, all the tyres apart from the full wet were sampled, with the teams able to collect relevant data."