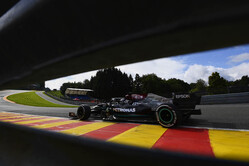 There is growing concern over the threat posed by Eau Rouge and Raidillon following another serious accident.

Just six minutes into qualifying for the W Series race, there was an accident involving six drivers, which resulted in two, Ayla Agren and Beitske Visser being hospitalised.

Going through Eau Rouge into Raidillon, Sarah Moore lost control of her car on the damp track and went off into the barriers, she was subsequently hit by a number of other drivers who either collided with her after also bouncing off the barriers or simply lost control on the run up the hill. In the chaos, one car was flipped over before spearing into the tyre wall.

It was a horrific accident that echoed the incident that claimed the life of F2 star Anthoine Hubert in 2019.

This latest incident followed Lewis Hamilton's earlier claim that a new bump in the complex has ruined the corner, arguably one of the most challenging on the schedule.

"It's a great, great circuit," said the world champion after finishing third in FP2. "It's very bumpy now through Eau Rouge," he added, "something's happening.

"They've kind of ruined it a little bit with whatever it is. I don't know if they have got a new patch of tarmac there, but there's a massive bump right at the compression point which we've never had there before.

"You feel it on the backside, but I'm sure they will fix it. I think has something to do with the mudslides, the rain, or something like that."

Indeed, several weeks ago, in mid-July, as widespread flooding followed unusually heavy rain in Germany, and neighbouring Netherlands, Belgium, and Luxembourg, the Spa circuit was particularly badly hit leading to fears the race might have to be abandoned.

Earlier this month, following the flooding, there was a multiple car incident at the infamous complex during the 24-hour race, leaving Williams reserve driver, Jack Aitken with a broken vertebra and collarbone.

The British-Korean driver was one of several to take to social media in the wake of the W Series crash.

"Seeing a bit too much finger pointing and 'I am/was right' on my feed atm," he tweeted, "let's just be bloody thankful that all the girls seem to have gotten away under their own steam.

"I'm pretty sure everyone has gotten the picture of what needs changing."

"Eau Rouge needs to make a change," wrote Alpine reserve, Guanyu Zhou, who is currently second in the F2 championship. "Don't want to go too deeply into it but when every race weekend we see a huge incident involved in the same corner, we can't just ignore it and move on."

"If I'm wrong for chasing for better safety after seeing 4 of my friends involved in massive accidents then I may as well not be human," added Callum Ilott. "I've come back to spa after 2019 and I will come back again after this. But that doesn't mean if something isn't good enough it shouldn't be fixed."

In 1994, in the wake of the accident at Imola that claimed the life of Ayrton Senna, fans and drivers alike were shocked when the FIA opted to place a temporary chicane at Eau Rouge in a bid to reduce speeds.