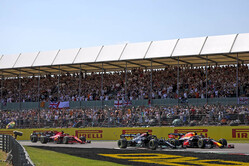 Helmut Marko has admitted that Red Bull is considering its options following Sunday's first lap clash, with the Austrian revealing that legal action is being considered.

Barely had the dust settled following the crash at Copse than Christian Horner was in touch with race director, Michael Masi calling for action over what he considered a deliberate move by Lewis Hamilton.

The stewards subsequently awarded the British driver a 10s time penalty for failing to avoid contact with Max Verstappen, yet despite this the Mercedes driver was able to go on and win the race, thereby taking a huge chunk out Red Bull's lead in both championships.

While Horner continued to express outrage over the incident, Helmut Marko went even further, calling for a race ban for Hamilton.

To that extent, Marko has revealed that the team is looking at its options and isn't ruling out legal action as he questions the stewards decision making process.

"He should check what you could do in such a situation within the framework of the sporting rules," the Austrian is quoted as saying by Kronen Zeitung.

"It was very lucky that nothing serious happened to Max, the car, and probably the engine too, is broken. You can't let that sit on you."

While Michael Masi insists that the stewards merely look at the incident itself and not what the repercussions of their decision might be, Marko believes that perhaps it is time for the process to be overhauled.

"A suspension would be justified," he insists, "but maybe the regulations are also to blame for being relatively restricted. The rules should be revised, including the stewards system. Perez got five seconds twice in Austria because there was marginal contact without anyone flying off.

"You could have given a drive-thru penalty plus ten seconds to Hamilton. But they didn't do that either.

"Max was on his line," he continued. "Where Hamilton was he had to lift off the throttle. You cannot hit your opponent on the rear wheel in one of the fastest corners, the lightest touch has fatal consequences.

"So, an irresponsible action... Hamilton needs to know what the consequences are."