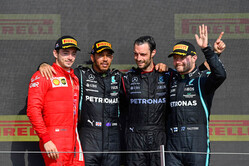 Charles, so close, so close, two laps too long for you for the win, but still an amazing drive from you today.
Charles Leclerc: Yeah, wow. It's difficult to enjoy 100%. Of course it's been an incredible race. I gave not 100% but 200%. I gave all of me, but it was just not enough in the last two laps. Congratulations to Lewis, he did an incredible job and it's amazing to see so many fans in the grandstand. It was fun in the car but I lacked just a little bit of pace towards the end.

It's tricky. You are disappointed with second place but I bet before the race weekend you didn't think you would be fighting for the win right until the end of this race?
CL: Yeah, we definitely did not expect it. We expected after qualifying to be quite competitive but no as competitive as now. We have been fighting for the win, which was incredible. Especially on the medium we were extremely, but then on the hard we lacked a little bit of pace compared to the Mercedes. But overall, it's much stronger than what we are used to.

You must be very proud of the whole team, how much you have progressed and it's exciting for the rest of the season for you guys now?
CL: The team is working incredibly well, so I am very proud of the team. Of course it's great to have these type of races, it cheers up everyone. There is a lot of work and it shows that we are doing something right and that we are working in the right direction. So we need to keep going like this. It won't be a smooth riding getting back to the top but we will give everything.

Valtteri, a little bit hot out there it looks like?
Valtteri Bottas: Yeah, I had no drinks. My drinks system didn't work.

Oh wow, that's a tough one. A good race though. A very different strategy to first and second but you were able to make it work pretty well and you were able to have a very long second stint?
VB: Yeah, I think the weakness today was the starts. On both starts I was wheel-spinning quite a bit, a bit like Lewis yesterday and that made it a bit more difficult, And obviously, I had to react to the stop of Lando in the beginning so we stopped a bit too early to be competitive towards the end but at least we got Lando and I helped Lewis to win.

Considering the early stop, fantastic points, you must be positive and confident moving forward to the next few races?
VB: As a team, yes. Strong weekend from that point of view and yeah, we'll go again in two weeks.

Lewis, eight times British Grand Prix winner. How does that feel?
Lewis Hamilton: It's nicely overwhelming. It was such a physically difficult race. What great weather. We've got the best crowd. A home crowd is the best! Thank you guys so much. Honestly, there is nowhere we go where we see people like this. They ain't got what we got. I'm so grateful to the fans. I wish everyone to stay safe as always and to get home safely but this is a dream for me today to do this in front of you all. I couldn't have done it without the teamwork from Valtteri and the amazing effort from the team.

I'm sure it's not the way you wanted the race to go, your battle with Max. It happens, but your fight back from there was fantastic. It must be very difficult mentally when you are fighting back mentally?
LH: It is tough. You know I have been giving it my all this past week. I've been in the factory and just giving it absolutely everything trying to uncover performance with this car with the guys and I'm just so proud of everyone for just continuing to work, even though we have had a bit of deficit. Today of course, I always try to be measured in how I approach... particularly in battling with Max, he is very aggressive and then today I was fully alongside him and he didn't allow me enough space. But regardless of whether or not I agree with the penalty, I took it on the chin and I just kept working and I was like, 'I'm not going to let anything get in the way of the crowd's enjoyment of the weekend and the national anthem and the British flag'.

Lewis, you must have experienced every emotion today. First up, describe how special it feels to win at Silverstone for an eighth time?
LH: They are all so unique and incredible, each experience on its own. I can't even compare it to the others. It's been a really unbelievable journey with the British crowd here, my home crowd, since 2006 in GP2. The roar that I experienced in 2007 for my first pole here was something I will never forget and of course my first win here was incredibly special. But to come here again and be in such a close battle, there was so much riding on this race. The will to succeed for the crowd... It's different when we go to these other races, you want to do it for your team and that, but here you know so many people and particularly this one because no one has been able to leave their homes for such a long time, so everything compounded has made this a monumentous (sic) kind of event for us and so important. It was a real honour to be able to wave the Union Jack and to go round the circuit. I'm very grateful and very humbled.

When you were hunting down Charles at the end at what point did you believe the win was on?
LH: He did such a fantastic job today. I honestly didn't know at the beginning that we would be able to beat him. I thought I had good pace initially on the mediums but then Charles just started opening up the gap and putting in some fantastic laps. I could see that he wasn't really managing so I was like 'Jeez, he's surely going to blister at some stage', but he said they don't blister so... For us, I started struggling with our front tyres. I knocked out the left front, it was completely empty, so I had to pit. Obviously with that pit... I hadn't even considered at the time I was chasing him, I hadn't considered the 10-second penalty. If anything I actually thought that 10 seconds would be added on at the end of the race. I didn't realise it would be a stop and go 10-second penalty. That felt like eternity sitting there for those 10 seconds. And then coming out, honestly Charles wasn't on my mind when I came out, it was really trying to see if I could catch the car ahead, just one by one, and obviously I got the McLaren, I was chasing down Valtteri and he was so gracious today to work so well as a team-mate to allow me to pass, so I could chase for the win for the team. That's great sportsmanship, I really do appreciate it. And yeah, then I saw myself catching him but I was thinking 'by the time I get to him my tyres would be finished at this pace'. But then I saw the backmarkers and I realised that might create some opportunities, so I was like 'I've got to catch him as soon as possible' so that when I did catch him there would be opportunities to fight. Then my heart nearly stopped when I went up the inside of you in Turn 9, because I though the same thing was going to happen that happened to me and Max. I had to change my boxers after.

You mentioned the incident with Max Verstappen on lap one. It's one of the biggest talking points of the race. Can you describe what happened from your point of view please?
LH: I don't really know what good it does for me to explain. Obviously got a good start and I was chasing down Max similar to yesterday. Obviously I was alongside him into six but I had to concede and I got a great tow down to Turn 9. Yesterday I went down the left-hand side and I really regretted not going for the gap that was down the right-hand side and so I dummied him, moved to the left and then moved to the right for that gap. I was pretty far up alongside him but I then could see he wasn't going to back-out and we went into the corner and then we collided. Of course, that's never the way I ever want to win a race or just in general to race but these things do happen. I just hope he's OK and look forward to many more races.

Lewis, do you think this will change the way the two of you race, going forward?
LH: I would like to think that we should generally grow and learn from these experiences. There's never a... there's rarely an incident that's 100% someone's fault. It's always a mixture because there are two people - or more obviously - so I think there's things that we can both learn. I would say that Max is probably one of the most aggressive drivers here - just from my personal opinion - he does a great job of course - but I think we have to really try to find the best balance we can on track with space and respect between one another so that we can continue racing and have good races without colliding.

Charles, Lewis has spoken about hunting you down. At what point did you realise the win was slipping away today?
CL: When Lewis passed me! Until then I still believed I could win this race, and it's the way it should be. If I was thinking of being second before that, I think it will have gone even worse. I believed in it until the very last moment. Obviously I had my engineer telling me Lewis' pace on the hard tyres, and I was like 'that's quick'. I was pushing 200% but obviously it wasn't' good enough to keep that first position in the last laps.