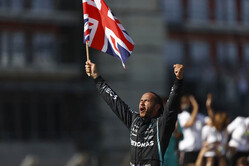 Lewis took his eighth British Grand Prix win with a courageous drive in front of a full-capacity crowd at Silverstone. Lewis and Verstappen collided on the opening lap when fighting for the lead into Copse Corner, with Verstappen hitting the barriers and Lewis suffering damage to his wheel rim.

The race was red-flagged as a result and Lewis received a 10 second penalty from the stewards when the race restarted 20 minutes later.

Valtteri lost a position at the start of the race but completed an undercut on Norris on lap 23 after the McLaren driver suffered a slow pit-stop, and the team reacting with a call to box.

Valtteri then drove faultlessly on a longer-than-intended stint on the Hard tyre, reaching P2 before being asked to let a surging Lewis past to fight with Leclerc up ahead. Lewis completed a fine overtake on Leclerc up the inside of Copse with two laps to go, in a repeat of his lap one move on Verstappen, and took the chequered flag in P1.

Lewis Hamilton: I have been giving my all the past week, working in the factory, just giving it everything to uncover performance in this car with the guys and I am so proud of everyone for continuing to work, even though we had to recover a deficit. Today, as always, I tried to be measured in how I approached the race, particularly battling with Max - he's very aggressive but I was fully alongside him and he didn't leave me any space. Regardless of whether I agreed with the penalty, I took it on the chin and I just kept working. I was just like, "I'm not going to let anything get in the way of the crowd's enjoyment of the weekend, the national anthem and the British flag". I couldn't have done it without the great teamwork from Valtteri and the amazing effort from the team so I'm very grateful and just so happy to deliver this result for the team and the fans.

Valtteri Bottas: The main issue for me today was losing a place at the start; it was the same yesterday so it's something we need to work on. During the race, we only had one option when Lando had a slow pit-stop: we had to pit as well, even though we knew the second stint would be long, and that's how it proved - it was tough towards the end of the race with the tyres blistering badly.

It's good to see every member of the team fighting so hard for this championship. Today there were surprises everywhere - Ferrari looked very strong, McLaren were good on the Medium tyre so it's great for racing and for the fans. Overall, we've improved the car coming into this weekend but we know there is still work to do.

Toto Wolff: We have seen a dramatic and exciting race today with Lewis winning the British Grand Prix again and catching Charles at the end - I think that was something for everybody. As for the incident between Lewis and Max, it always takes two to Tango and these two competitors were not giving each other an inch. It's a high speed corner and that's why these things are nasty to look at, but there is a clear regulation that is black and white on paper - if the front axle is over the middle of the car on the outside, it is your corner.

This is a championship where the greatest driver of all time, a seven-time world champion is fighting with a tool that is maybe not as good as the other car, driven by an up and coming star who is trying to make his mark. And they collided and crashed. We have seen that in days before and with all the great rivalries in history, and this is what happened today. The most important thing is that Max is fine, and the rest of the race was great.

Andrew Shovlin: A great result for the team, we've had a few tough races but the team has worked so hard over the last few weeks and this is a great reward for everyone. The first half of the race was pretty tough for both drivers on the Medium tyres; in traffic we were limited by tyre overheating and it was impossible to close up sufficiently to attack. We'd planned to go long with both but when Lando had a poor stop, we called Valtteri in early to bank that position.

With Lewis we struggled with a bit too much understeer in the first stint and eventually came in due to the front tyres dropping. On the Hard tyre we could start to push the car to its potential and it was great to see Valtteri able to pull away and Lewis able to close the gap to Charles. We'd expected to catch with a couple of laps to go but Lewis's pace didn't drop and in the end it was a comfortable win despite having to drop the ten seconds with the penalty. We came here to win and to close the gap in the championships so we should be very satisfied with our work this weekend. We're nearly half-way through and there's hardly anything in it, we know that Red Bull are going to bounce back strong so from first thing tomorrow morning we'll be putting all our efforts into the next race in Budapest.