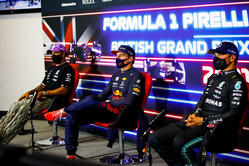 i}Congratulations Max, winner of the Sprint. Great result and probably exactly what you needed after Qualifying yesterday?
Max Verstappen: Yeah, around here it's difficult to start but we had a good start and a good fight with Lewis on the first lap and then we tried to do our own pace, but you could see we were pushing each other hard because at the end of the race the tyres were blistering a lot, so we had to manage that to the end. Nevertheless, happy to of course to score those three points and it sounds a bit funny to then hear 'you scored a pole position' but anyway we will take it and again I think it will be a really exciting battle tomorrow.

It's interesting looking at the tyres on all of the cars out there, the blistering on them. It really does show you when you push the tyre what happens and how much you guys have to look after the tyres in a race situation?
MV: Yeah, you start the race on lower fuel and we really push these cars through the fast corners lap after lap so it is really hard on tyres. But it's the same for everyone so we have to deal with it.

A great start here and it must bode well for tomorrow. Obviously the straight-line speed difference is quite big between yourself and the Mercedes, which was a surprise. You can't really do much for tomorrow can you?
MV: No, we are not allowed to touch the car. I think we are quick in corners so that's where we have to make sure that we do the same tomorrow. The straight-line speed, that's the thing, after FP1 you cannot make any changes and that's a bit tricky for us now but we just have to deal with it. I still think we can have a very strong race. I just have to say also a big thank you to the fans. I know they are here for the British drivers and they have a bit more support, but it's still great to see them cheer and all I want is a good battle with Lewis especially, but also with everyone.

Lewis, I'm sure it's not how you wanted to finish Saturday after a fantastic job in Qualifying yesterday. Just one poor start and it puts you in P2 without strategy during the Sprint Race, it's tough, right? But you were fighting hard on that first lap.
Lewis Hamilton: Yeah, I mean I gave it everything today. Firstly, I've got to give a lot of love to all these fans. I can't tell you the energy I'm getting from everyone; the support means a lot to me. I'm sorry I wasn't able to get the win in Sprint, but tomorrow we fight again. I mean I hit target on my start... Yeah, it's not good when you lose from P1 but we'll try to turn a negative into a positive tomorrow.

Can you take a positive from it knowing it was only a 17-lap race, it was only three points. You only lost one point?
LH: Every point counts, man, so I wouldn't say that. I'm grateful to have finished and tomorrow, as I said, we will fight again. But they are just so strong. In the race he was pulling away and there was nothing I could do to hold on. So we've really got to try and be in front somehow. They have done a great job with their engine. Their starts are really great this year and we have lost a bit of performance on our starts, so we've got to try to work a bit harder to try to improve that because losing positions is never a great thing.

The consistency with your starts seems to be reasonably good but with the Red Bull it seems to be a little bit more up and down. Can you take positives from that? You are starting where Max started today and with the straight-line speed you guys seems to have you can do that lap one all over again.
LH: I hope so. Agh! I wish we could re-do the start. Luckily we have it tomorrow. I don't know how it was to watch for the fans. This weekend has been awesome in terms of... Yesterday was such a fun day, to have qualifying on a Friday, way more enjoyable. I don't know whether that was the most exciting or not but we should do more like that, maybe a different version of it in future, because it just makes the weekend more enjoyable. I need everyone to bring their energy again tomorrow and I'll come with my A-game.

Valtteri, you took the gamble with the soft tyres at the start, which looked like it could be something really interesting and I guess you were trying to jump Max, but it ended up being your team-mate that was the one you almost got in Turn 1?
Valtteri Bottas: We tried to do something different and obviously the target was to try to get him in at the start or on the first lap. It didn't happen. I think he had a good start as well. In Turn 1 I was slightly blocked, so I couldn't really use the momentum, but we tried, and in the end I still managed to keep the place with the soft even though there was some blistering but it was OK.

It wasn't just the soft runners that had blistering; it was also the medium runners. So I guess this is really useful information for the team to have run soft and medium. Both blister by at least you have got a good understanding of the tyres?
VB: Yeah, definitely shows that tomorrow is not going to be easy and if it's going to be a bit warmer we might see more issues. At least now we are definitely aware and tomorrow anything can happen.

Max, you've created a bit of history today. How much did you enjoy Sprint Qualifying?
MV: I think what was nice in the beginning was of course you start with lower fuel in this race, so naturally the cars are faster and that is what you like and the car is a bit more alive. So that was fun compared to a heavy car and everything and it's just slow in the beginning, so I enjoyed that bit for sure.

And what about your approach to the sprint. Was it any different to a normal race?
MV: What is important is to try to make a good start, have a clean first lap and then of course you try to just settle in, you know, and follow your pace. That's what I tried to do, what I tried to think about before I jumped in the car. Of course, when it works out, it's great. I think in the end not much really changes.

Well, talk us through the start. Front brakes were on fire but you still had a good launch.
MV: Yeah, I was really worried. A little bit of fire, it's not... it's OK but at one point it was becoming quite big and I was just looking in my mirror to the guys in the back, saying please, speed up, speed up. So then, of course, I was not sure going into Turn 3 if my brakes were going to work but luckily it didn't do too much damage. I saw a few people in the grandstand making pictures when the brakes were on fire. For sure they have a good few shots there.

And Max, let's look ahead to tomorrow's race. What did you learn today that will be useful in the grand prix itself?
MV: I think what we learned today is that it's very close again. It's a bit different. It seems like we are quick through corners, they are quick on the straight this weekend and, of course, after one free practice session, and then you're not allowed to make any changes and you don't get it right, then you're a bit stuck. So I think we're a bit stuck on the straight, so that's why we have to make up our time in the corners - but yeah, it seemed like in this more-or-less flat-out race - you cannot really call it flat-out but at least pushing more, the pace was alright but I still expect with a pit-stop coming into play - or two pit stops, who knows - it's again going to be a good fight.

Lewis, you've had a few moments to reflect on Sprint Qualifying. How do you reflect on what's just happened?
LH: Pretty much the same as the last races in terms of just following behind Max. Yesterday was a more enjoyable day in terms of just qualifying is great. It's very hard to follow naturally in these cars, so it wasn't the most exciting but hopefully it was for the fans.

Did you enjoy sprint qualifying?
LH: I can't say I particularly enjoyed it too much - but it's nice to have more races for sure.

Talk us through the start. You said a moment ago that you hit the target - but could it have been better?
LH: Well, it was terrible, so of course it could be better.

What did you mean by 'hit the target'?
LH: Well, we have a target position that you have to hit with your clutch and that's what the goal is always to be on target, and I was on target, so I did what I was supposed to do but it didn't deliver, for whatever reason. I don't know why. Had a lot of wheelspin and the rest is history.

Let's throw it forward to tomorrow. It's the main event. What can you do to beat Max tomorrow? Do you think you've got the car underneath you?
LH: I think he had a lot of pace in him today and I don't think he was particularly having to push too hard, and we were flat-out. Tomorrow's going to be tough. If I can try somehow to keep up with them through the stints, maybe we can apply pressure through strategy - but we're not going to be overtaking them on the track: they're just too fast. So, we play the long game hopefully.

Valtteri, you did something a little different today, you started sprint qualifying on the Soft tyre. What was the reason for that?
VB: Yeah, we tried something different. We thought most of the cars are going to start on the Medium, so it would give a bit of an opportunity for me, for lap one, for the start and the first few corners. We tried the Soft in FP2 and actually it was a bit better than I thought it would be. It didn't quite work out but luckily the risk was quite minimal, so I managed to keep my place. The start itself, the performance was good - but I was a bit blocked into the first corners so I lost the momentum. So, yeah, we tried and it's not a disaster because the main day is tomorrow.