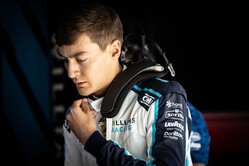 George Russell has been handed a 3-place grid penalty for Sunday's British Grand Prix after being adjudged as causing the collision with Carlos Sainz.

Having spoken with both drivers and viewed the relevant video evidence, the stewards founds that Russell and Sainz approached turn 6 with the Williams driver on the inside, in the middle of the track, and the Ferrari on the outside.

Russell locked the front brakes briefly and then understeered towards the edge of the track at the exit of the turn and contacted Sainz, who was forced off the circuit and on to the grass.

Finding Russell at fault for the incident, the Briton, who was due to start the Grand Prix from 9th, was handed a 3-place grid penalty and will therefore start from 12th.

He was also handed 1 penalty point bringing his total to 7.

The stewards noted that breaches of the regulations of this sort in a race normally result in time penalties, which are scaled based on normal Grand Prix race lengths. However, because of the shorter length of sprint qualifying and because it is used to establish the grid for the race, the stewards feel that grid position penalties, as imposed here, are more appropriate.