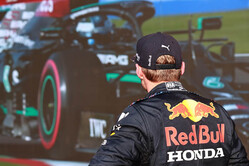 Missing out on pole by just 0.075s, Max Verstappen said he was unable to put together a perfect lap due to his car feeling "weird".

Having out-paced title rival Lewis Hamilton by 0.780s in practice, it was widely assumed that claiming a fourth successive pole position would be a mere formality for Max Verstappen, but it was not to be.

From the outset in qualifying, Hamilton appeared to have the edge, or at least the measure of the Red Bull driver, but in Q3 the Briton came into his own.

"I had a lot of understeer so I couldn't really attack any corners," Verstappen told reporters at session end. "I was just waiting for the front to grip up.

"We just need to look at ourselves because I think the car itself is actually handling quite well," he continued. "We were still quite close so it's alright.

"It's a bit of a weird feeling, to be honest, to drive," he added. “I didn't really feel like it was front wing or set-up related, so a very odd feeling with the front tyres. They just didn't give me the grip, so we need to have a look at what's happening there because we tried a few things. But it was not really improving my feeling throughout qualifying. Understeering in qualifying is slow."

Despite losing out to his rival, who has clearly found more pace this weekend, Verstappen refused to be dejected.

"It is what it is," he said. "To be that close in qualifying is really good for us, on a track that we know they are very strong. If we can fix the weird feeling we had in qualifying, then I'm sure we can do a good job."