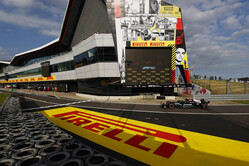 Mercedes driver Lewis Hamilton made history by claiming pole position for the very first sprint qualifying to be held in Formula 1. The Englishman set a best time of 1m26.134s on the P Zero Red soft C3 tyre, ahead of Red Bull's Max Verstappen.

As the fastest driver in qualifying, Hamilton also claimed the inaugural Pirelli Speed King Award, which replaces the Pirelli Pole Position Award on events with sprint qualifying. The driver starting Sunday's grand prix from pole position will be the winner of the half-hour sprint qualifying race tomorrow.

Qualifying today took place much later than usual, at 18:00, with 25 degrees ambient and 38 degrees of track temperature - which gradually fell as the evening went on.

All the drivers used the P Zero Red soft tyres for today's qualifying session from start to finish in accordance with the revised tyre rules for races with sprint qualifying. However, the drivers can start tomorrow's sprint qualifying and Sunday's grand prix on whichever compound they like from the three nominated this weekend.

The single hour-long free practice session today took place in the warmer conditions of the afternoon, where the drivers had the chance to sample the other nominated tyres as well. Verstappen was fastest in FP1, going 0.4 seconds quicker than the equivalent session last year. Pole position was slower than last year, but this was also affected by the engine maps being fixed for tomorrow's sprint qualifying race.

The revised format makes it harder to work out the performance gaps between the compounds. But based on the data from FP1, there's an estimated gap so far of about 0.6 seconds between P Zero White hard C1 and P Zero Yellow medium C2, as well as between medium and soft C3.

Mario Isola: "There was a lot for the teams to get used to with the new format, influencing the way in which they used their tyres, bearing in mind the half-hour sprint qualifying race tomorrow that the teams will want to run without pit stops.

"Considering the severity of this circuit, there's an important decision to be made about whether to run on the medium - which should be the most popular choice - or soft tyre tomorrow, keeping in mind also the mandatory tyres that will be needed for the grand prix on Sunday.

"As a result, there is quite a complex set of parameters for the teams to take into account with no previous experience to fall back on. And this is why many teams ran all three compounds in FP1 to gather as much information on them as possible.

"Qualifying was obviously much straightforward than usual with all the drivers running on the soft from start to finish, culminating in a fight for the fastest time that was extremely closely-fought at one of the most demanding tracks for tyres of the year."