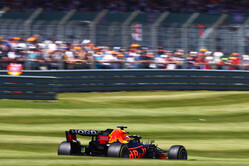 We've just tweeted that even if Sprint Qualifying is not judged to have been a success, we fear that in the coming weeks Ross Brawn will use his post-race debrief to suggest that if nothing else the trial demonstrated that a two day weekend will work.

Indeed, as Max Verstappen questions the pint of this morning's practice session, one has to assume that it's the usual smoke and mirrors the sport is famed for.

Of course, the main point will be tyres, as the drivers consider the best strategy for tomorrow while at the same time wondering whether to gamble on mediums or even hards this afternoon.

With this afternoon's 'race' deciding the grid for tomorrow - and we still haven't decided how to deal with our qualifying stats - drivers can't afford to lose any track time, or worse, damage their cars, so it is unlikely that anyone will be taking too many risks this morning.

There is no doubt that Verstappen and his team were surprised by Hamilton's performance yesterday, and going forward it is going to be interesting to see how Red Bull deals with it.

It's also going to be interesting to watch the McLaren/Ferrari battle, while Aston Martin, AlphaTauri and Alpine scrap behind.

As more drivers head out all three compounds are in use.

Sainz complains of a lot of air entering his visor and causing him discomfort.

Schumacher crosses the line at 34.017, but Ocon responds with a 32.220. However, the Frenchman is on softs while the Haas driver is on mediums.

As Vettel goes second with a 33.741, Hamilton heads out on softs, the Briton locking up shortly after.

A 33.593 sees Norris go second, ahead of Raikkonen, Vettel and Sainz.

A 31.973 sees Perez go second, as Russell complains about the wind.

Heavy fuel load is currently the order of the day as the drivers look ahead to tomorrow, the focus will soon switch to this afternoon's sprint.

Perez goes top with a 31.382 as teammate Verstappen finally heads out.

Sure enough, the world championship leader crosses the line at 30.428 having gone quickest in all three sectors.

"Possible damage on the rear deflector," Bottas is warned, however the Finn denies running over the kerbs (at the exit to Turn 9). Hamilton, who lost precious time in Austria with similar damage, is also warned.

Perez reports that his car is "on the nervous side with the wind".

Gasly leapfrogs his teammate with a 31.486 to take third.

On the half-hour, Hamilton bolts on a set of used softs.

Bottas is told that there is a tear-off stuck at the left-rear deflector of the car - hence the fears of damage - and this will be removed when he pits. So the Finn was correct when he said he hadn't abused the kerbs.

Moments later, having had that pesky visor removed - it was one of his own - Bottas goes fourth with a 31.349.

On used mediums, Verstappen goes quickest in all three sectors, crossing the line at 29.902.

"Do we really need to keep pushing this engine, can't we save laps?" asks Hamilton. "Yes," comes the reply, Pete Bonnington admitting that the team needs the information.

With 13:00 remaining, attention will soon switch to the Sprint. Indeed, Perez, Norris and Gasly bolt on softs, albeit used softs.

Norris posts a 30.831 but has his time deleted for exceeding the limits at Turn 9.

Verstappen heads out on hards, while Sainz is on softs. The Dutchman is told that the plan is for six timed laps, possibly seven.

All in all, it's a very strange session, with attention clearly divided between this afternoon and tomorrow, but not in the same was as if this afternoon was qualifying.

Contrary to what was expected, there are no flying laps, instead the drivers opt for consistent pace on a variety of compounds.

Consequently, we have absolutely no idea of the true pecking order, certainly in terms of the Sprint.